A few weeks ago my friend Di invited a group of us to take part in a virtual cookie exchange today.  The task was simple – bake a special cookie, take a picture and post it on your blog, so we could all discover new recipes and just maybe, find a few we want to try this holiday season.  I never need an excuse to bake, but I’m always happy to have one.  I’ve often thought a cookie exchange would be fun, but I don’t think I could round up enough friends locally who would want to take part in one, so the virtual exchange was perfect.  And besides, the virtual part means fewer cookies in my belly, which is probably a good thing with all of the other baking I’ll be doing this holiday season. 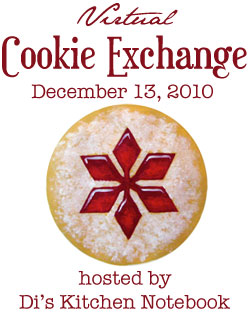 But, how to choose a cookie for the exchange? That was a challenge. At this point I’ve lost count of the number of cookie recipes I’ve flagged in the past few weeks. It almost makes me wish December was twice as long so I’d have more than the 12 days that remain between now and Christmas to make all of them. In the end, I came to a decision the way I so often do – I procrastinated and mulled it over until the last possible minute, until I was forced to get in the kitchen and bake or risk missing today’s deadline. I found that I kept coming back to these chocolate turtle cookies, a twist on the classic jam thumbprints that are always popular around the holidays. I think the turtle concept is probably more common in brownie form (I even made them earlier this year, and they were the ultimate in decadence, which may be why these cookies called to me the way they did), but I had a feeling the cookie version would be just as well received. These “thumbprints” are comprised of dense, fudgy chocolate cookies that are rolled in chopped pecans and then filled with gooey, rich caramel after they’re baked.  Though you could certainly go the homemade route, this recipe calls for melting caramel candies with some heavy cream for the filling, making them even easier.  I made half of my cookies without the pecans since I’m not a fan, and they turned out just as nicely.  That said, the pecans disguised the cracks that developed around the edge of the cookies, giving them a more polished look if that’s important to you.  I know they’re not super traditional, but I don’t think anyone would be disappointed if you shared these cookies this holiday season 🙂

Many thanks to Di for the invitation to this virtual cookie exchange.  She’ll post a round-up of the recipes later this week, and I’ll update this post with the link at that time. Whisk the flour, cocoa powder and salt in a medium bowl.  In the bowl of a stand mixer fitted with the paddle attachment, beat the butter and sugar on medium-high speed until light and fluffy, about 2 minutes.  Add the egg yolk, milk and vanilla and mix until incorporated.  With the mixer on low, add the dry ingredients and mix just until combined.  Turn the dough out onto your work surface, shape into a disk, wrap in plastic and refrigerate until firm, about 1 hour.

Preheat oven to 350 F, with racks in the top and bottom third.  Line two baking sheets with parchment.

In a small bowl, whisk the egg whites until frothy.  Put the chopped pecans in a wide, shallow bowl and set aside.

Remove the dough from the fridge.  Break off 1-inch pieces and roll into balls.  Dip the balls in the egg whites (coating on all sides), then roll them in the pecans.  Transfer to the prepared baking sheets, spacing the balls about 2 inches apart.  Using a 1/2 teaspoon measure, make an indentation in the center of each ball of dough.