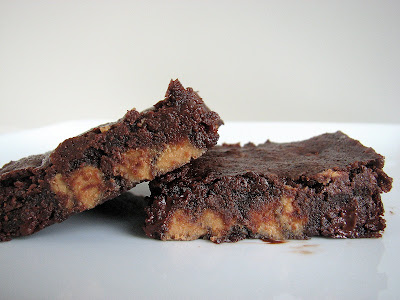 This week’s TWD was chosen by Lisa of Surviving Oz: tribute to Katharine Hepburn brownies! Lisa isn’t actually a member of TWD, but she was the winner of a recent contest to design a new logo for us. Here’s what she came up with:

Isn’t it terrific? Thanks for the new logo Lisa and thanks for hosting this week! Lisa will be posting this week’s recipe on her site so head over there to check it out! You can also visit the TWD site to see all of the other brownies.
These brownies were really interesting to make. I don’t think I’ve ever made brownies where the batter was entirely mixed in a saucepan as it is with this recipe. Not that I’m complaining – less dishes to wash makes me a happy camper! The recipe called for walnuts or pecans, but I went with peanut butter chips instead since I had some I wanted to use up and I don’t really like nuts in my brownies. I also omitted the cinnamon and used instant espresso instead of instant coffee. I didn’t want the coffee flavor to be overwhelming so I only used 1 teaspoon rather than the 2 called for in the recipe. 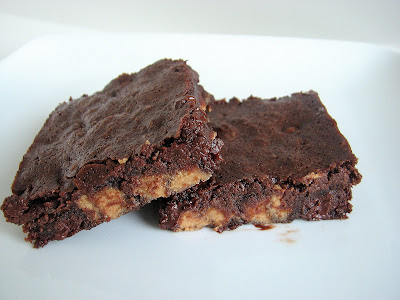 I baked the brownies for exactly 30 minutes as Dorie suggests. I let them cool for quite a while before trying to remove them from the pan. Sadly, at that point, they did not want to come out of the pan – I cursed myself for not making a parchment sling for the pan. I sacrificed the first brownie so I could get the rest of them out relatively unscathed. I could tell as soon as I cut them that they’d be incredibly gooey and fudgey and they definitely were! I prefer my brownies less dense so these weren’t my favorite. The flavor was pretty good (the coffee flavor was just right with 1 teaspoon), but I couldn’t get past the texture. I’m sending them to work with Shane today so we’ll see what his coworkers think! For me, I think I’ll stick with some of my other favorite brownie recipes.
(Visited 99 times, 1 visits today)