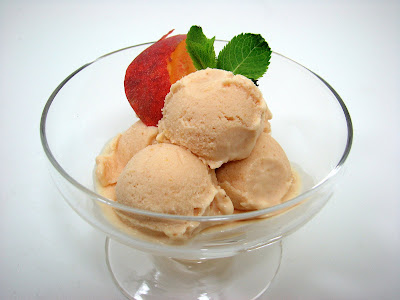 I don’t want to harp on my lack of enthusiasm for peeling peaches since I’ve already discussed it twice on this blog so I won’t 🙂 Instead, I’ll just thank my new friend Diana, who made her ice cream before me and shared via Twitter that I didn’t actually have to peel the peaches. She simply strained the peach puree when she added it to the custard so that’s what I did too! 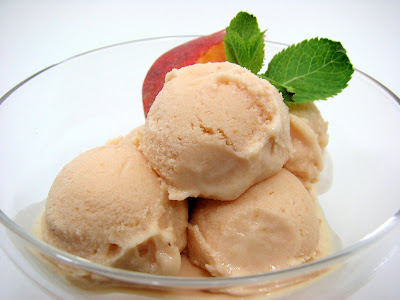 I made a third of the recipe this week, which moved the process along a bit faster than usual since the quantity of ingredients was so small. I think the custard probably only took about 5-7 minutes from start to finish. I threw a bit of rum (about a teaspoon or so) in the custard along with the vanilla extract because I find that my homemade ice creams tend to get a bit too frozen. I chilled the custard in an ice bath and it cooled quickly, again because there was so little of it. On the advice of many of the other TWD bakers, I skipped adding bits of peach to the ice cream as it finished churning. 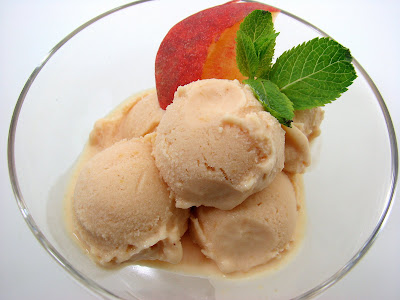 As for the verdict….as I suspected, this wasn’t my favorite ice cream. I will say, though, that it makes for a fun change! I tend to always choose mint chocolate chip when we go out for ice cream and this is certainly a nice departure from all that chocolate. Dorie suggested pairing this ice cream with her sugar cookies and I wish I’d had a chance to make those cookies this week as I am sure it would have been a fantastic combination!!

Thanks to Tommi for encouraging me to get my ice cream maker out for the first time this year! I know this is the first of many treats I’ll make it in this summer. You can find the honey peach ice cream recipe on Tommi’s blog and you can see all of this week’s ice cream by visiting the TWD site.