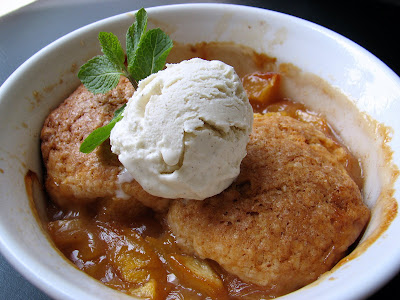 This week’s SMS was chosen by Andrea of Nummy Kitchen: peach cobbler! I love almost any baked fruit dessert so I was psyched about this week’s recipe! That said, I did have my reservations about the peaches. Last year we made a summer fruit galette for TWD and I chose to use only peaches in my galette. The first step in the recipe was removing the skins of the peaches and, to put it mildly, it did not go well for me. It’s left me a bit traumatized when it comes to peaches but I was hopeful this experience would go a bit better.

I decided to scale the recipe down quite a bit as I was the only one who would be eating the cobbler. I wound up making 1/4 of the recipe since it was fairly easy to do the calculations in my head. I made the biscuits first and learned that 1/4 of the biscuit recipe was enough for either one large biscuit or two small ones. Due to their cuteness factor, I went with two.

Next came the peaches. I blanched them as I’ve read I should do but still, those skins just didn’t want to come off. If anyone has tips on how to remove the skins from peaches, I’m all ears! Fortunately, since I was only making 1/4 of the quarter, I didn’t have to peel many peaches. I used a combination of brown sugar and white sugar in the filling after seeing Holly’s post this morning. 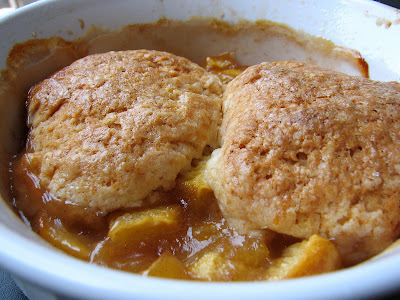 After the cobbler baked, I put the world’s smallest scoop of vanilla bean ice cream on top and dug in. I really, really enjoyed the biscuits but the filling was a bit too sweet for even me, which is saying a lot. I can probably count on one hand the number of times I’ve found something too sweet. I still ate the whole thing though and thought the vanilla bean ice cream was the perfect accompaniment. I’ll definitely make this again once peaches are in season here – I’ll just cut back on the sugar in the filling a bit.

Thanks to Andrea for a delicious pick this week! You can find the recipe as well as her adorable heart-shaped biscuits on her blog and you can check out the other bakers’ cobblers by visiting the SMS site!