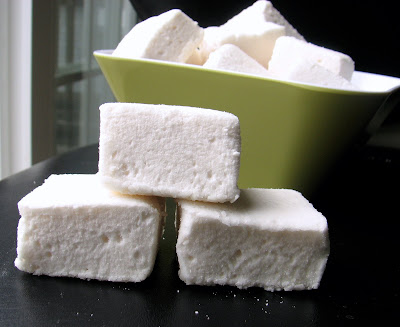 The TWD group made marshmallows the week before I joined. At that point, I was already reading many of the TWD blogs so I’d seen their marshmallows and I’ve sort of been wanting to try making them myself ever since. So, a few weeks ago when I saw a recipe for homemade marshmallows on Smitten Kitchen that Deb claimed was easy, I knew I had to try it! Plus, it’s summer and I’m craving s’mores and how cool would it be to have homemade marshmallows in my s’mores? 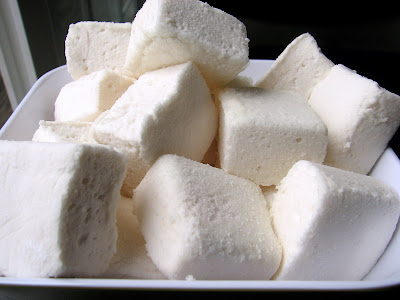 Now that I’ve finally gone and made marshmallows I really wish I hadn’t waited so long to give them a shot. I’d heard so many horror stories about failed marshmallows and sticky messes that I kept putting them off, but my experience with this recipe was not only successful, but really pretty enjoyable. I tried one of the marshmallows immediately after cutting them and found it was a bit too sweet, but the next day, I thought the flavor was perfect! They’re much better than store bought marshmallows. I find myself reaching for another one every time I pass them sitting on the kitchen counter. I’m hoping this weekend I’ll finally get to try making my s’mores with them! 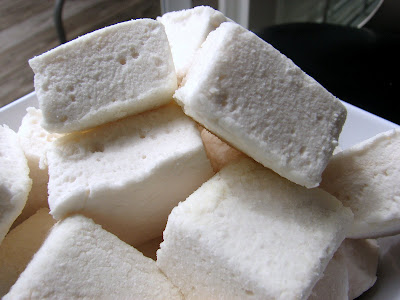 Marshmallows
adapted from Gourmet, December 1998 via Epicurious.com (as seen on SmittenKitchen.com)

In the bowl of a stand mixer fitted with the whisk attachment, sprinkle gelatin over 1/2 cup cold cold water, and let stand to soften.

Meanwhile, in a 3-quart heavy saucepan cook granulated sugar, corn syrup, second 1/2 cup of cold water, and salt over low heat, stirring with a wooden spoon, until sugar is dissolved. Increase heat to medium and boil mixture, without stirring, until a candy thermometer registers 240 F, about 12 minutes. Remove the saucepan from heat and pour sugar mixture over gelatin mixture, stirring until gelatin is dissolved.

Using stand mixer beat mixture on high speed until white, thick, and nearly tripled in volume, about six minutes. Meanwhile, in a separate medium bowl with cleaned beaters, beat egg whites (or reconstituted powdered whites) until they just hold stiff peaks. Beat whites and vanilla into sugar mixture until just combined. Pour mixture into baking pan and sift 1/4 cup confectioners’ sugar evenly over top. (You’ll want to work fairly quickly getting the mixture into the baking pan because it starts to set almost immediately.) Chill marshmallow (room temperature worked fine for me), uncovered, until firm, at least three hours, and up to one day.

Run a thin knife around edges of pan and invert pan onto a large cutting board. Lifting up one corner of inverted pan, with fingers loosen marshmallow and ease onto cutting board. With a large knife trim edges of marshmallow and cut marshmallow into roughly one-inch cubes. (I sprayed my pizza cutter with nonstick cooking spray and used that.) Sift remaining confectioners’ sugar back into your now-empty baking pan, and roll the marshmallows through it, on all six sides, before shaking off the excess and packing them away.

The marshmallows will keep for 1 week when stored in an airtight container at room temperature.