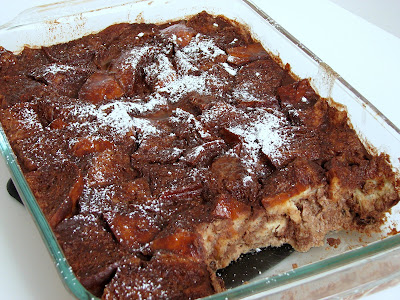 This week’s TWD was chosen by Lauren of Upper East Side Chronicle: four-star chocolate bread pudding! I have to confess that I almost skipped this week’s recipe. You see, I’ve never had bread pudding and didn’t think this would be something I’d like at all. I reconsidered after seeing how easy the recipe was and, well, because I joined this group to try things I wouldn’t otherwise make! 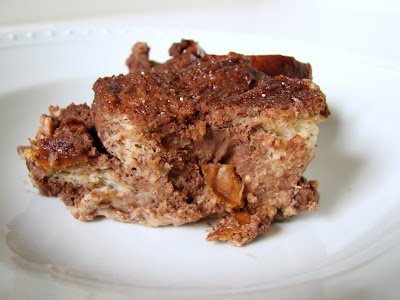 Since it was my first time making bread pudding, I decided to follow Dorie’s recipe to the T. I wish I’d had time to make my own bread to use in the recipe but by the time I decided to participate this week, there just wasn’t enough time. I went with a loaf of challah from Whole Foods as the next best option. I was glad Dorie provided instructions for “staling” the bread in the oven since my loaf was very fresh. 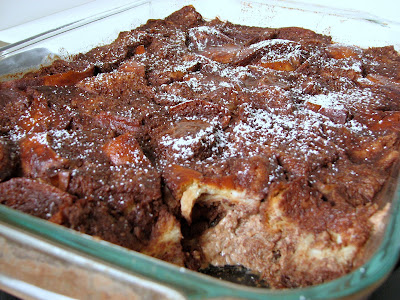 I loved how simple this recipe was: heat the milk and cream then whisk it into a combination of sugar and eggs before adding the chocolate and pouring it over the bread. I threw some raisins in with my bread as Dorie suggested since I absolutely love the combination of chocolate and raisins. The bread didn’t quite soak up all of the liquid before I baked it, which I subsequently learned worried some of the other TWD bakers, but I was blissfully ignorant and didn’t even consider it might be a problem! 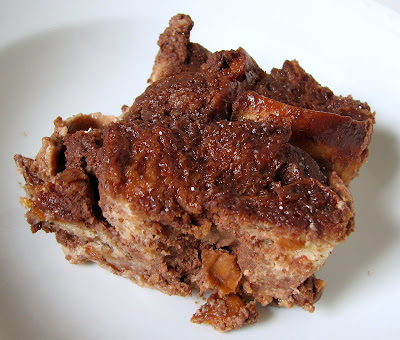 Fortunately, in the end, I don’t think the extra liquid mattered at all. My bread pudding seemed done after about 35 minutes and I didn’t even let it cool before trying some. Oh my, am I ever a chocolate bread pudding convert!!! This was SO good! It sort of reminded me of soggy french toast and I mean that in a very complimentary way 🙂 I’m not sure if I’d like “regular” bread pudding because for me, the chocolate seemed like a key ingredient but perhaps I’ll give it a try with some of my leftover challah. One thing is for sure and that’s that chocolate bread pudding is not a terribly photogenic food, but I’m not going to hold it against it.

Thanks Lauren for introducing me to the goodness that is bread pudding! You can find the recipe on Lauren’s blog. Be sure to head over to the TWD blogroll to check out the other bakers.