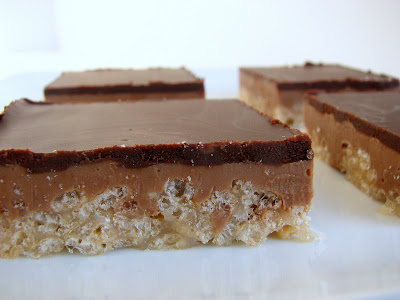 Mary of The Food Librarian has got to be one of my favorite food bloggers. Everything she makes looks amazing and I envy her photography skills like you wouldn’t believe. Mary, who as you may have guessed from her blog title is a librarian, celebrated National Library Week on her blog this week. If you haven’t already done so, you must stop by her site to see what she’s been up to this week….great recipes, fun giveaways and the best part of all: the librarian action figures. They’ve really been cracking me up all week and I’m feeling a bit sad they won’t be around to brighten my days anymore. As I’ve blogged about plenty in the past few months, I’ve really come to appreciate everything my local library offers, which may also explain why I’ve enjoyed Mary’s posts so much!

A few months ago I was able to get my hands on the well-known Baked cookbook by Matt Lewis and Renato Poliafito. I made these muffins and loved them. Unfortunately, that was the only recipe I tried before I had to return the book to the library. I put in another request for the book immediately and after a short wait, got it back again! This time I’ve resolved to make more than one recipe and I started with the peanut butter crispy bars. These bars are the most popular refrigerated bars made at the bakery and it’s not hard to see why: chocolate, peanut butter, crisped rice cereal – they’re an adaptation of the Rice Krispy Treats many of us loved as kids. 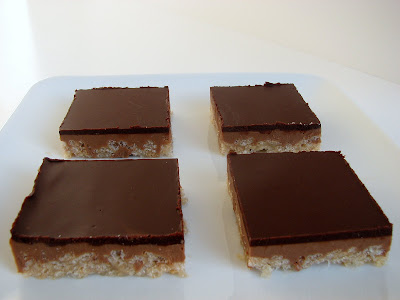 These bars are super simple to make. I’d note just a few things. First, you do have to chill two of the layers (for about an hour each) to allow them to set so plan accordingly. Next, when you add the chocolate icing layer I recommend tilting the pan to spread the chocolate as opposed to using a rubber spatula to push it into the corners. I used a spatula at first and even though my milk-chocolate peanut butter layer had set, the warm chocolate icing loosened it up a bit and I wound up mixing a bit of that layer with the chocolate icing. Finally, the authors recommend cutting the bars into 9 squares but because these are so rich I decided 16 squares might be better. These were a big hit with just about everyone who tried them. Shane had a problem with the texture but he was the only one who had any complaints. These definitely tend to soften up if left sitting out and I think they were better cold so that’s something to consider when serving. 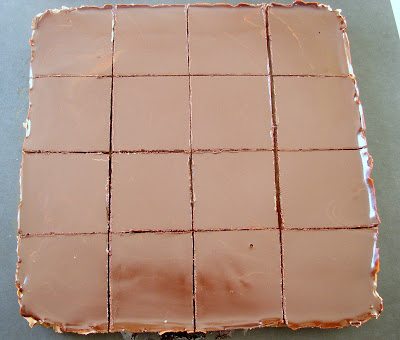 To make the crust: Lightly spray a paper towel with nonstick cooking spray and use it to rub the bottom and sides of an 8-inch square baking pan. (I lined my pan with aluminum foil (which I sprayed with the cooking spray) so the bars could simply be lifted out once they set.)

Put the cereal in a large bowl and set aside. Put 1/4 cup water into a saucepan. Add the sugar and corn syrup to the pan and use a small wooden spoon to stir the mixture just until combined. Cook over medium-high heat and bring to a boil; cook until the mixture reaches 235 F on a candy thermometer.

Remove from the heat, stir in the butter and pour the mixture over the cereal. Working quickly, stir until the cereal is thoroughly coated, then pour into the prepared pan. Using your hands or a rubber spatula, press the cereal mixture into the bottom of the pan only. Let cool to room temperature while you make the next layer. 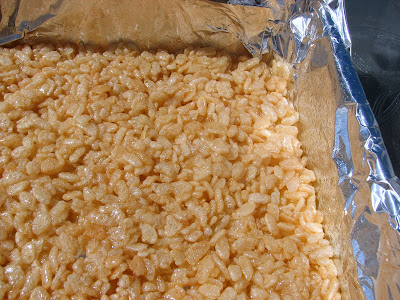 To make the milk chocolate-peanut butter layer: In a large nonreactive metal bowl stir together the chocolate and peanut butter. Set the bowl over a saucepan of simmering water and cook until the mixture is smooth, stirring occasionally with a rubber spatula. Remove the bowl from the pan and stir for about 30 seconds to cool slightly. Pour the mixture over the cooled crust. Put the pan in the refrigerator for 1 hour, or until the top layer hardens. 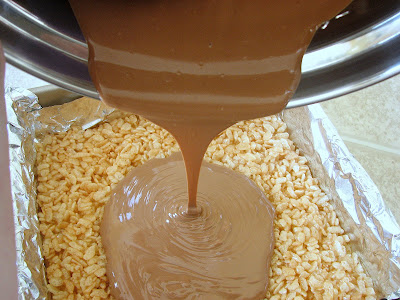 To make the chocolate icing: In a large nonreactive metal bowl, combine the chocolate, corn syrup and butter. Set the bowl over a saucepan of simmering water and cook until the mixture is completely smooth, stirring occasionally with a rubber spatula. Remove the bowl from the pan and stir for about 30 seconds to cool slightly. Pour the mixture over the cooled milk chocolate-peanut butter layer and spread into an even layer. I recommend simply tilting the pan to spread the chocolate around as opposed to using a rubber spatula which is more likely to disturb the layer below. Put the pan in the refrigerator for 1 hour or until the topping hardens. 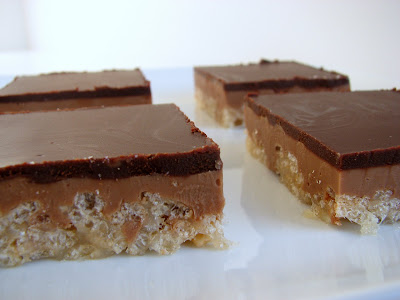 Cut into 16 (or 9) squares and serve. The bars can be stored tightly covered in the refrigerator for up to 4 days.