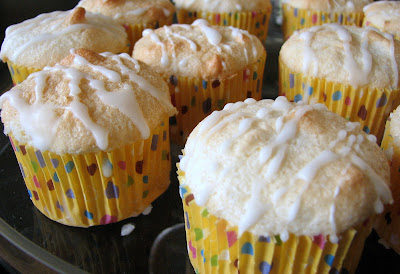 This week’s TWD left me with several leftover egg whites and indecision as to what to do with them. Last time I had egg whites I tried my hand at macarons. That was fun and they were delicious, but I wanted to try something else this time. Luckily, I remembered that just a few days ago I’d seen lemon angel food cupcakes on Two Peas and their Pod – perfect!

These cupcakes are really terrific in a number of ways. First, they’re super simple and require just a few ingredients. I had them in the oven minutes after I started making them. Also, they’re more healthy than your typical cupcake so you don’t have to feel as guilty about eating more than one 🙂 Finally, and most importantly, they’re yummy! They’re so light and airy and have just a hint of lemon flavor. I think they’d also be delicious with some blueberry sauce and I may just whip some up later this week! 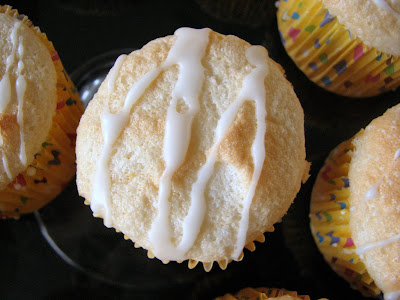 Lemon Angel Food Cupcakes
as seen on Two Peas and their Pod, originally from Baking Bites 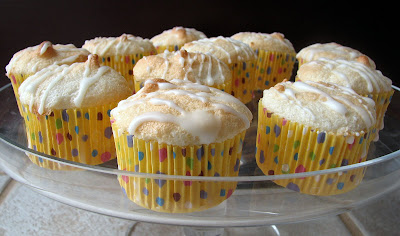 In a small bowl, sift together cake flour and 1/4 cup superfine sugar.

In the bowl of an electric mixer fitted with the whisk attachment, beat egg whites until foamy, then add in cream of tartar and salt. Gradually add in the remaining 1/2 cup of superfine sugar while the mixer is on high speed, beating the egg whites to soft peaks. Mix in the vanilla extract and lemon zest. Fold the flour/sugar mixture into the beaten egg whites in two or three additions.

Divide the batter evenly into prepared muffin tins. You will end up filling each of the tins almost to the top.

Bake for 16-18 minutes, or until the cupcakes are golden brown and the tops spring back when touched. Cool on a wire rack.

To make the icing: Put the confectioners’ sugar in a small bowl and add about 1 1/2 tablespoons of the lemon juice. Stir with a spoon to moisten the sugar, then add enough additional lemon juice, a dribble at a time, to get an icing that is thin enough to drizzle from the tip of the spoon. Drizzle lines of icing over the tops of the cupcakes.