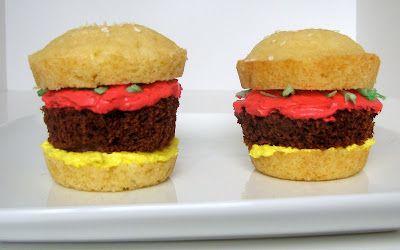 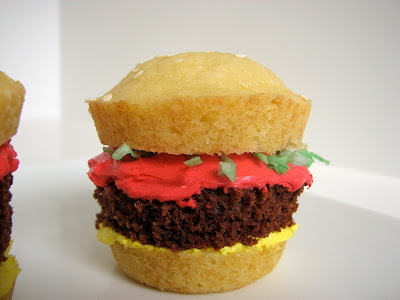 Shane and his friends started a tradition many years ago called “meat fest”. Essentially, it’s a day to celebrate meat and eat as many varieties and strange concoctions involving meat as possible. The tradition has carried on and we recently celebrated this year’s meat fest with everyone. I am by no means a vegetarian, but often I find myself wishing there was a non-meat option at meat fest. Problem is, non-meat options are sort of frowned upon. I solved my dilemma this year by making these little hamburger cupcakes! I figured even if they didn’t actually involve meat at least they resembled it…..close enough, right? 🙂 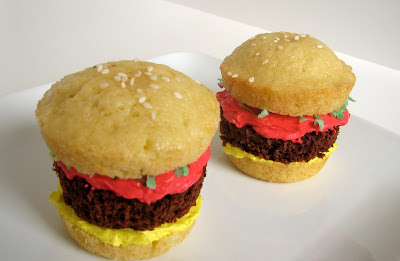 I can’t remember where I first saw these, but I used this photo as my inspiration. I couldn’t find a recipe anywhere so I scoured many resources for recipes I thought would work. The cupcakes consist of vanilla cupcakes to represent the hamburger bun, chocolate cupcakes to represent the hamburger, frosting for the ketchup and mustard and shredded coconut (dyed green) for the lettuce. I also added sesame seeds to the tops of the vanilla cupcakes (secured with a bit of orange juice brushed on) to give the buns more realism. Here are links to the recipes I used: 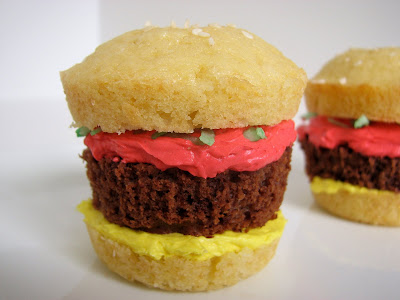 Being the fool I am, I waited until the last minute to make each of the components for the burgers so these were a definite labor of love. While making these I decided I need to get a second bowl for my KA mixer to make life easier. If I were to make these again I would definitely make the cupcakes a day or two in advance and just frost and assemble on the day I needed them. The frosting was actually one of the more tricky aspects of the cupcakes and I really wasn’t able to achieve the colors I was going for. My ketchup is more pink than red but no matter how much red gel coloring I added, I couldn’t seem to achieve red. 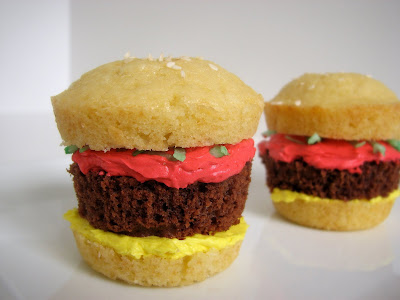 These were a lot of fun and despite all the work, I’m glad I made them! They were very tasty, though a little tricky to eat because of their height. And even though they didn’t involve any meat, just about all of them were gobbled up at meat fest, so that has to be a good sign!