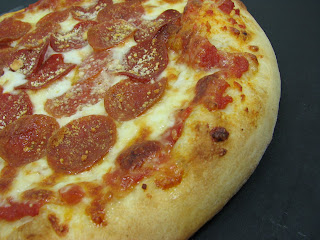 We love pizza but we rarely order out, especially lately in this economy. We’ve been trying to eat at home as much as possible to save money. Plus, I love how much latitude it gives us to top the pizza exactly the way we want. We can put as much or as little sauce and cheese as we’re in the mood for and can each have the toppings we like (me: veggies, Shane: meat). Anyway, we have a go-to pizza crust recipe which I’ve posted about before. That recipe never fails but, for a number of reasons, when I saw this recipe on Annie’s blog, I wanted to give it a shot. The pan pizza recipe essentially fries the bottom of the crust to get it really crispy and delicious and while I love it, I’m not sure it’s the healthiest thing to be eating. I was really excited when this recipe came out so beautifully! It was an easy dough to work with and when baked, is perfectly crisp on the outside with a chewy interior! I think I may like it even more than the pan pizza and that’s saying a lot. With these two recipes in my arsenal, I don’t have any desire to order out for pizza anymore! 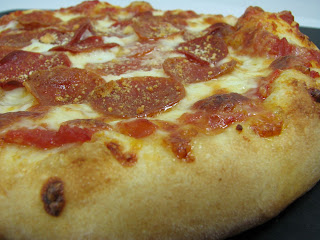 Measure the warm water into a 2-cup liquid measuring cup. Sprinkle in the yeast and let stand until the yeast dissolves and swells, about 5 minutes. Add the room-temperature water and oil and stir to combine.

Process the flour and salt in a large food processor, pulsing to combine. Continue pulsing while pouring the liquid ingredients (holding back a few tablespoons) through the feed tube. If the dough does not readily form into a ball, add the remaining liquid and continue to pulse until a ball forms. Process until the dough is smooth and elastic, about 30 seconds longer.

The dough will be a bit tacky, so use a rubber spatula to turn it out onto a lightly floured work surface. Knead by hand for a few strokes to form a smooth, round ball. Put the dough into a deep oiled bowl and cover with plastic wrap. Let rise until doubled in size, 1 1/2 to 2 hours. Press the dough to deflate it.

Turn the dough out onto a lightly floured work surface. Use a chef’s knife or dough scraper to divide the dough into 3 pieces. (At this point, if you are only making one pizza, you can put the extra pieces of dough in separate airtight containers and freeze them for up to several weeks.) Form each piece of dough into a smooth, round ball and cover it with a damp cloth. Let the dough relax for at least 10 minutes but no more than 30 minutes.

Working with one piece of dough at a time and keeping the others covered, shape the dough. To do so, first flatten the dough into a disk using the palms of your hands. Next, starting at the center of the disk and working outward, use your fingertips to press the dough until it is about 1/2 inch thick. Holding the center in place, stretch the dough outward. Rotate the dough a quarter turn and stretch again. Repeat until the dough reaches a diameter of 12 inches. Finally, use your palms to press down and flatten the thick outer edge of the dough.

Top the pizza as desired and bake fully. Depending on your oven, the type of stone or other baking surface, and the amount of topping, the pizza may be done in as little as 6 minutes or may take as long as 12 minutes. The pizza should be pulled from the oven when the edge of the crust is golden brown and the toppings are sizzling. I used a pizza stone in a 500 degree oven (the stone sat in the oven while it preheated for about 30 minutes) and baked the pizza for about 10 minutes.

Pizza Dough Kneaded by Hand
Follow the recipe for Pizza Dough through step 1. Omit step 2 and instead combine the salt and half the flour in a deep bowl. Add the liquid ingredients and use a wooden spoon to combine. Add the remaining flour, stirring until a cohesive mass forms. Turn the dough onto a lightly floured work surface and knead until smooth and elastic 7 to 8 minutes, using as little dusting flour as possible while kneading. Form the dough into a ball, put it in a deep oiled bowl, cover with plastic wrap, and proceed with the recipe.

Pizza Dough Kneaded in a Standing Mixer
Follow the recipe for Pizza Dough through step 1. Omit step 2 and instead place the flour and salt in the bowl of a standing mixer fitted with the paddle. Briefly combine the dry ingredients at low speed. Slowly add the liquid ingredients and continue to mix at low speed until a cohesive mass forms. Stop the mixer and replace the paddle with the dough hook. Knead until the dough is smooth and elastic, about 5 minutes. Form the dough into a ball, put it in a deep oiled bowl, cover with plastic wrap, and proceed with the recipe.

5 Responses to "Another Pizza Crust"