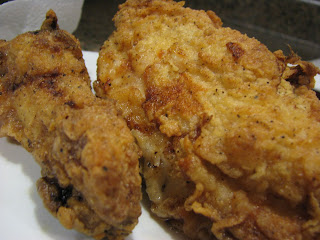 Earlier this week I found myself with a whole chicken that needed to be cooked. I really didn’t want to simply roast it so I thought about what else I could do. Not too long ago I’d seen the Barefoot Contessa use a whole chicken to make this oven-fried chicken so I thought I’d give it a shot. The name “oven-fried chicken” is a bit deceiving as the chicken is first quickly deep fried before being placed in the oven to finish cooking. I guess it’s probably still a bit more healthy than if the only method of cooking was frying.

One of the biggest lessons I learned in making this recipe is that I’m a terrible butcher. It took me forever to get this chicken cut up and, when I’d finished, some of the pieces didn’t look quite right (mainly the breasts, which were particularly tricky). Another time-consuming task was frying the chicken. I could only fit a couple of pieces of chicken in the pot at one time so I had to do quite a few batches. When you consider the initial time waiting for the oil to climb to 360 F plus the actual frying time of each batch as well as the time I had to wait for the oil to climb back up to temperature after each batch….well, let’s just say I’m not the most patient person. In the end, the chicken was delicious (even as leftovers as we reheated a few pieces for dinner tonight). It’s crispy on the outside and very moist on the inside. I probably wouldn’t make it again unless we invested in a deep fryer, but only because I’m far too impatient, not because the recipe isn’t great. Also, I haven’t figured out a good solution for disposing of the oil so I really try not to fry too often.

Place the chicken pieces in a large bowl and pour the buttermilk over them. Cover with plastic wrap and refrigerate overnight.

Combine the flour, salt, and pepper in a large bowl. Take the chicken out of the buttermilk and coat each piece thoroughly with the flour mixture. Pour the oil into a large heavy-bottomed stockpot to a depth of 1-inch and heat to 360 F on a thermometer.

Working in batches, carefully place several pieces of chicken in the oil and fry for about 3 minutes on each side until the coating is a light golden brown (it will continue to brown in the oven). Don’t crowd the pieces. Remove the chicken from the oil and place each piece on a metal baking rack set on a sheet pan. Allow the oil to return to 360 F before frying the next batch. When all the chicken is fried, bake for 30 to 40 minutes, until the chicken is no longer pink inside. Serve hot.