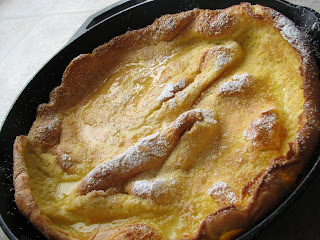 One of the gifts I received for Christmas was a cast iron skillet. I’ve been wanting one for a while so it was very exciting to receive it! Only problem? I wasn’t sure exactly what I should make in it. I had some basic ideas, but I knew I wasn’t familiar with the broad range of uses it had. So, I started browsing some cookbooks on Amazon and found The Cast Iron Skillet Cookbook, which had great reviews and looked like a good overview for me. Luckily, my library had the book and I was able to borrow it recently.

I knew I wanted to start with something basic and this recipe for a Dutch baby couldn’t be more simple. It only has 4 ingredients and comes together in seconds. I’ve never seen or tried a Dutch baby though, which made this interesting. I didn’t know what it should look like or taste like when it was finished. I followed the directions and took it out of the oven when it looked golden and had puffed up. It deflated almost immediately but based on some quick internet searches, that appears to be normal. The recipe clarifies the butter before drizzling it over the pancake, but I probably wouldn’t bother with that step when I make this again. I made this on the morning of Valentine’s Day and we enjoyed it quite a bit! I’m not sure I like it more than traditional pancakes or french toast, but it’s such an easy recipe to throw together that I know we’ll make it again. 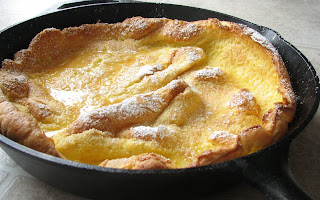 Melt the butter in a 12-inch cast iron skillet over low heat. Mix the eggs, flour and milk in a blender on medium speed until just blended, 5 to 10 seconds. Pour the batter into the skillet with the melted butter.

Place the skillet in the oven and bake until the top puffs up and is lightly golden, about 25 minutes.

To clarify the butter for the topping, melt it over low heat in a small saucepan. Skim off and discard the foam. Remove from the heat and let stand until the solids settle, about 5 minutes. Pour through a strainer into a glass measuring cup.

When the Dutch baby is done, drizzle the clarified butter over the top, then sprinkle with the lemon juice and dust with the powdered sugar. Cut into six wedges and serve immediately.