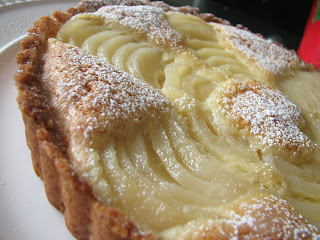 This week’s TWD marks the start of the second year of Tuesdays with Dorie! I didn’t join until April, but the other bakers had already been working their way through the book since January. To celebrate the one year anniversary of the group, none other than Dorie Greenspan herself was asked to choose the recipe! She was happy to do so and she chose one of her favorites: the french pear tart! Despite the fact that I bake quite frequently, I rarely make tarts so this was a good opportunity for me to try my hand at one! 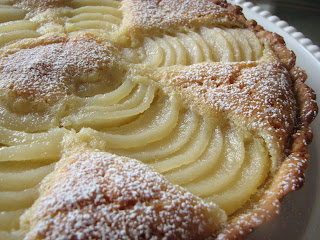 This recipe has three components: the tart shell or crust, the almond cream and the pears. Though the finished tart looks very fancy, each individual component is really simple! Both the crust and the almond cream are made in the food processor and the pears come from a can, if you can believe it. The recipe can be also be made with fresh pears (poached or unpoached) but I still haven’t figured out the art of choosing the best fresh produce so I stuck with canned pears. 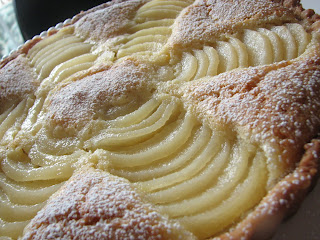 I think this tart is one of the prettiest desserts I’ve ever made. As it cooks, the almond cream puffs up and browns around the pears. I dusted mine with confectioners’ sugar to finish it off but you could also glaze it with jelly to give it some shine. When I make something that I think looks nice (particularly a cake, pie or tart), I’m hesitant to cut into it and “ruin” it. Silly, I know. But since I was giving this tart away and wanted it to look its best, I didn’t cut a slice for myself to try. I did, however, taste the components individually and they were all delicious! I wasn’t sure how many pear halves came in a can so I bought more than I needed and now I know I’ll be using them to make this tart again! 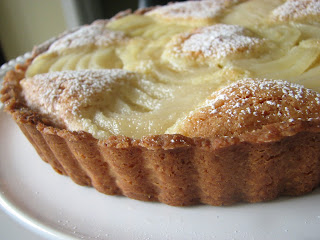 Many thanks to Dorie for her pick this week! Be sure to head over to her site for the recipe as well as some beautiful photos. As always, you can also check out the TWD bakers to see how they made out with this week’s recipe.