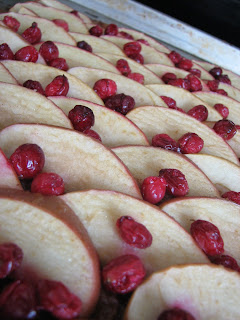 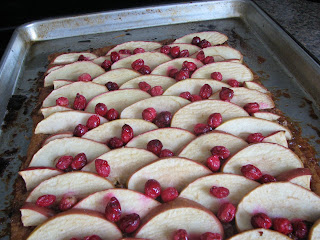 I’m still playing catch-up on the blog with some of the Thanksgiving treats I made. This treat played into my recent obsession with cranberries as well as my desire to attempt using phyllo dough for the first time. Plus, it looked so pretty in the pages of Martha Stewart Living! 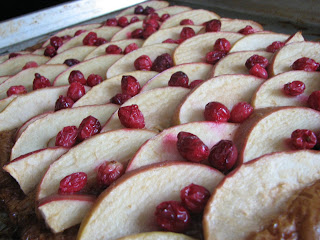 I researched a bit on how to work with the phyllo dough before I started since I’d heard some horror stories. Turns out the phyllo dough just dries out very quickly if you’re not careful so the goal is to avoid that. I laid my phyllo out on a piece of plastic wrap and then covered it with another sheet of plastic wrap and finally with a damp towel and that seemed to keep it moist enough for me to work with for 15-20 minutes. The phyllo dough is very thin and I did tear a few sheets, but overall it was fairly easy.

As for this dessert, I was a bit disappointed in the flavor. I completely skipped over the instruction to sprinkle cinnamon between the sheets of phyllo dough so I lost some of the flavor there and maybe that played a role. Also, I didn’t try it until probably 4 hours or so after I’d made it, so maybe it would have been better when it was warm. I will try to make it again sometime because I love the combination of flavors in this recipe. 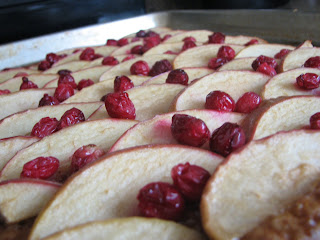 Remove from oven, and brush top gently with 2 tablespoons maple syrup. Place a row of apple wedges along one short side, with rounded edges facing out. Make a second row of apples next to the first row, overlapping the rows slightly and staggering the wedges so that the rounded edges of the second row fall in between the rounded edges of the first row. Cut wedges as needed to fill gaps at ends of each row. Scatter cranberries over top. Drizzle with 3 tablespoons of the remaining butter and remaining 3 tablespoons maple syrup, and sprinkle with sugar.

Bake until apples are just cooked and cranberries have softened, about 25 minutes. Let cool slightly.

Before serving, whisk cream until soft peaks form. Cut tart into squares. Drizzle with maple syrup, and serve with whipped cream on the side.