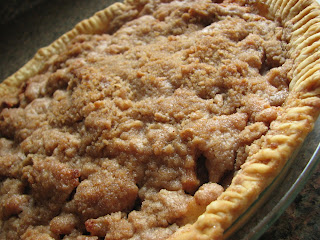 I love apple pie but I love it even more when someone else makes it. I’m still apprehensive to make pie dough as I seem to have mixed results. When you combine that with the time required to peel and core all of the apples, you get a dessert I don’t make too often. That said, sometimes I get a craving and nothing else will satisfy it. I suppose I could buy a pie but it’s just not the same. I’ve been meaning to make this apple crumb pie from my Williams Sonoma Pie and Tart book for a while now so when the craving for apple pie struck, this is where I turned. I like this pie because it combines apple pie with apple crisp by using a crumb topping instead of traditional dough on top. Also, the filling has so many delicious fall spices that it’s perfect for this time of year. The whole house smelled amazing as the pie baked and I had quite a few slices before I decided it was time to share with others 🙂 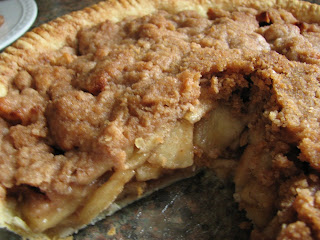 Fold the dough round in half and transfer to a 9-inch pie pan. Unfold and ease into the pan, without stretching it, and pat it firmly into the bottom and up the sides of the pan. Using kitchen scissors, trim the edge of the dough round, leaving 3/4 inch of overhang. Fold the overhang under itself and pinch it together to create a high edge on the pan’s rim. Flute if desired.

To make the crumb topping, in a small bowl, stir together the flour, brown sugar, cinnamon and salt. Using a pastry blender, cut in the butter until the mixture is crumbly. Cover and chill in the refrigerator until ready to use.

To make the filling, place the apples in a large bowl, sprinkle with the lemon juice and toss to coat evenly. In a small bowl, stir together the sugar, cornstarch, cinnamon, nutmeg, cloves and salt. Sprinkle the sugar mixture over the apples and toss to distribute evenly. Immediately transfer to the dough-lined pan. Sprinkle evenly with the crumb topping.