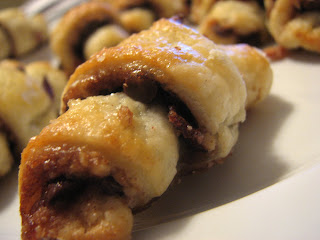 This week’s TWD was chosen by Grace of Piggy’s Cooking Journal: rugelach! I have to confess that I had never even heard of rugelach, much less tried it, before I saw Ina Garten make it on Food Network a few weeks ago. I was definitely intrigued by the concept when I saw her make it, so I was really glad that Grace chose the rugelach this week! 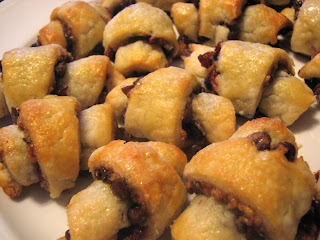 I made a few variations to this week’s recipe. I used strawberry preserves as opposed to raspberry or apricot as Dorie suggests because that’s what I had on hand. Also, I didn’t have currants but found some dried cranberries on sale at Target so I threw those in. I used mini semisweet chocolate chips instead of bittersweet chocolate though I guess that’s no surprise as I substitute semisweet for bittersweet most of the time… 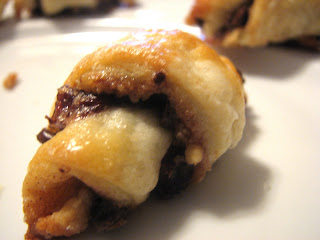 I have to say that I really enjoyed making these rugelach! I was worried that working with the dough would be difficult as I struggle with pie dough, especially the process of rolling it out. This dough, however, was much more cooperative! It never got incredibly sticky and I was able to move it around as necessary. I need to work on my geometry skills, though, because when I cut the dough into wedges they were all different sizes!

The true test for these rugelach was the taste. I had no expecations since I’ve never tried them before. I wasn’t sure how all of the flavors would combine but as it turns out, the predominant flavor was chocolate and I have no problem with that! There were definitely hints of the other flavors. In fact, I found myself reaching for a second one just to try to pick out the cranberries, pecans and strawberry preserves. The best part of the rugelach for me was the dough! It was flaky and light and almost reminded me of puff pastry in a way. I could detect the cream cheese but it wasn’t overpowering. I know I will definitely make these again and experiment with some other fillings! 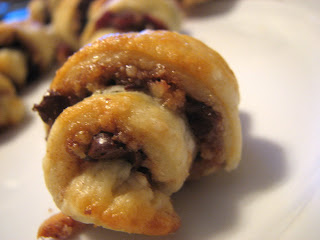 Sorry my post is quite late this week. I’ve been glued to the tv watching the election results pour in. Grace has posted the rugelach recipe on her blog so if you want to make this recipe, head over there! Be sure to check out TWD to see the many variations of rugelach baked this week!