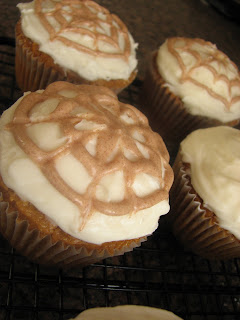 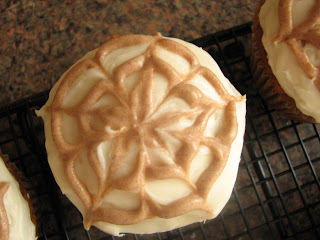 I’ve been wanting to make these cupcakes ever since I bought the Cupcakes! book and flipped through it. There’s a gorgeous picture of the cupcakes with a perfect spiderweb decorated on each. I convinced myself it wouldn’t be too hard to replicate the design and set out to make these for Shane’s office party. The cupcakes baked up beautifully and the frosting came together quickly. The spiderweb pattern, however, was quite tricky. I think part of the problem I ran into was that I didn’t add enough milk to the brown frosting so it was a bit too thick which made it tough to pull lines through. I was still fairly pleased with the final product. The spiderwebs were cute and festive and that was the goal 🙂 They were also quite tasty. I tried one of the cupcakes and they had good pumpkin flavor and were really moist! 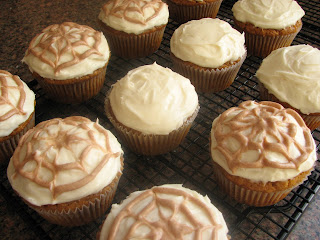 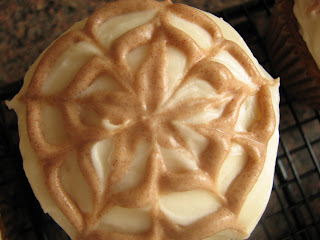 Sift the flour, baking powder, baking soda, salt, cinnamon and ginger into a medium bowl and set aside. In a large bowl, using an electric mixer on low-medium speed, beat the melted butter, sugar and pumpkin until smoothly blended. Mix in the eggs and the crystallized ginger. On low speed, mix in the flour mixture until it is incorporated. The batter will be thick.

Fill each paper liner with a generous 1/4 cup of batter, to about 1/2 inch below the top of the liner. Bake just until the tops feel firm and a toothpick inserted in the center comes out clean, about 25 minutes. Cool the cupcakes for 10 minutes in the pan on a wire rack before turning them onto the rack to cool completely.

To make the frosting: In a large bowl, using an electric mixer on low speed, beat the butter, cream cheese and vanilla until smooth and thoroughly blended, about 1 minute. Stop the mixer and scrape the sides of the bowl as needed during mixing. Add the powdered sugar, mixing until smooth, about 1 minute, then beat on medium speed for 1 minute to lighten the frosting further.

Transfer 1/4 cup of the frosting to a small bowl, and stir in enough cinnamon to make the frosting a light brown color and enough milk to make a thick but pourable frosting. Set aside to use for the spiderweb decoration. Use a small spatula to spread a scant 1/4 cup of the remaining frosting on top of each cupcake in a smooth even layer.

Spoon the reserved cinnamon frosting into a small self-sealing freezer bag. Press out the excess air and seal the bag. Cut a tiny hole in one corner of the bag, about 1/16 inch long. Hold the bag about 1/2 inch above a cupcake and slowly pipe 2 circles, one inside the other, on the frosting. Pipe a dot of frosting in the center. Using a toothpick, and beginning at the center, draw the tip gently through the frosting toward the edge of the cupcake. Move the toothpick about 3/4 inch away and, beginning at the edge of the cupcake, draw it toward the center. Continue pulling shallow lines, alternating the direction of the toothpick, around the top of the cupcake, to form a web pattern. Repeat with remaining cupcakes.

The cupcakes can be loosely covered and stored at room temperature for up to 3 days. 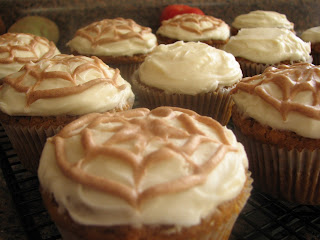