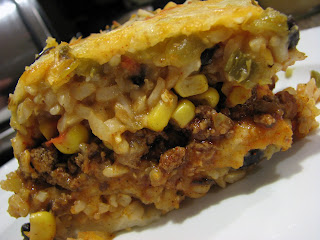 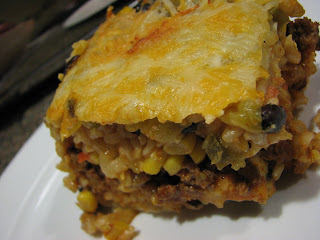 Ever since I’ve started cooking and baking more, I’ve wanted to make lasagna. I don’t know why I’ve waited so long, but I finally got around to it last week. I had seen this Mexican lasagna on both Annie’s blog and on Pioneer Woman Cooks, and had decided to make it instead of a more traditional lasagna (I went with Annie’s version since she’d already done the work of scaling the recipe down a bit).

While it took a while to prepare and assemble, none of the individual parts of this recipe were difficult. Plus, I was excited about how much food it made because I knew we’d have leftovers for a while. Unfortunately, Shane ended up not really caring for the lasagna so now there’s a ton left over for me to tackle alone. (In his defense, I didn’t think he was going to like it but he did try it, which is a step in the right direction.) I froze most of the leftovers so I’ll be eating Mexican lasagna for weeks 🙂 Not that I’m complaining, since I really enjoyed it! I used ground turkey instead of ground sirloin and still thought the lasagna had plenty of flavor. Once I get through my stockpile in the freezer, I’ll probably make a traditional lasagna but I know I’ll also be making this one again before too long! 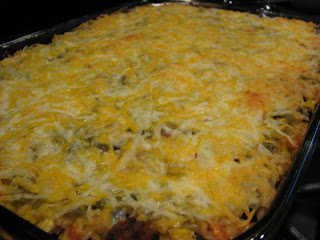 1 can black beans, drained and rinsed

Cook the rice according to package directions with chicken broth in place of water. Salt to taste. In a large skillet, melt a ½ tablespoon of butter over medium-high heat. Add the tomatoes, onion and garlic to the pan and sauté until onion is tender. Add in chili powder (approx. 1 ½ tablespoons), paprika and cumin (approx. ¾ tablespoon of each), or taco seasoning to taste. Stir to combine. Add the can of beans and stir to combine. Transfer the mixture to a large bowl and add cooked rice. Stir to mix well.

In the now empty skillet, brown the ground sirloin. Mix with chili powder (approx. 1 ½ tablespoons), paprika and cumin (approx. ¾ tablespoon of each) and salt to taste, as well as 2 oz. of water to create the taco beef.

To assemble the lasagna, pour half of the jar of salsa verde in an even layer over the bottom of a casserole dish. Layer evenly with flour tortillas to cover. Spread approximately half of the rice mixture evenly over the tortillas. Sprinkle with a layer of shredded Mexican cheese. Add another layer of flour tortillas. Pour a thin layer of enchilada sauce over the tortillas. Spread taco beef evenly over the enchilada sauce. Layer one can of corn over the beef. Top with the remaining rice mixture in an even layer. Spread the remaining salsa verde evenly over the rice, and sprinkle with a layer of shredded cheese to finish.

Bake at 375 F for 25-35 minutes, or until the cheese has melted and begins to brown a bit. Allow to sit 10 minutes before serving. Top individual servings with sour cream and fresh cilantro, for garnish.