When I saw these cupcakes on Annie’s blog about a month ago, I knew I wanted to make them immediately. You see, I love apples, especially cooked apples. I also love apple pie. However, I stink at making pie crust and it stresses me out, so I rarely do it. I suppose I could buy the premade crusts and use those, but it just feels like cheating. Anyway, all that is to say that I was excited to try these cupcakes as a substitute for apple pie. There are multiple parts to these cupcakes but they’re not complicated. They come together relatively quickly. I did struggle a bit with cutting the cone shape out of each cupcake, but I think with practice, that would be pretty easy too. So, making them was certainly easier than making apple pie, but what about the taste? They’re delicious!! I had to restrain myself from eating the chunks of cake I cut from each cupcake in order to fill them. The apple filling is perfect and this frosting is my favorite buttercream ever. I don’t know how I’ve never used this buttercream recipe, but it will definitely be a go-to in the future. Many thanks to Annie for posting these!

(Sorry for the poor lighting in the photos. It was late by the time I finished making these….) 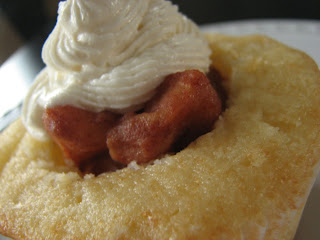 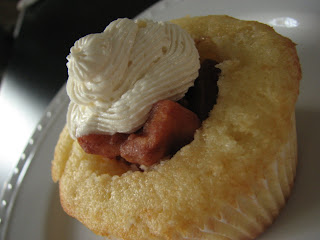 To make the cupcakes, preheat the oven to 350 F. Line two cupcake pans with paper liners.

In a medium bowl, sift together the cake flour, baking powder and salt. In the bowl of an electric mixer, cream the butter and sugar together on medium-high speed until light and fluffy, about 2 minutes. Beat in the eggs one at a time, mixing well and scraping down the sides of the bowl after each addition. Add the vanilla extract and mix well to combine. Add in the dry ingredients alternately with the milk, beginning and ending with the dry ingredients. Stir until just combined.

Divide the batter evenly among the cupcake liners, filling them about 2/3-3/4 full. Bake until golden and a toothpick inserted in the center comes out clean, about 18 to 22 minutes. Remove from the oven and allow to cool for 5 minutes in the pans. Transfer to wire racks to cool completely.

To make the apple filling, heat the butter in a medium skillet over medium-high heat. Add the cinnamon and sugar and cook for a minute, until the mixture begins to bubble. Lower the heat to medium and stir in the apples. Mix well. Cook until the apples are somewhat tender, about 10 minutes. Remove from heat and let cool.

While the apple mixture is cooling, use the cone method (use a paring knife and cut a cone shape out of the top of your cupcake to leave room for filling) to remove a chunk from the center of each cupcake, making sure to leave a rim around the top of the cupcake. Fill the holes with the cooled apple mixture. 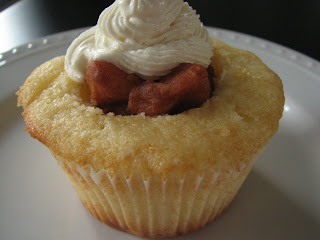 One Response to "Apple Pie Cupcakes"