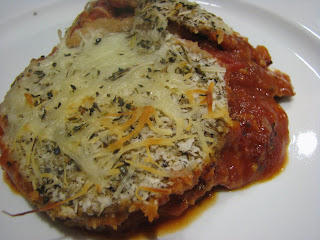 Eggplant parmesan is a meal I’d typically never cook at home for a variety of reasons (mainly because it’s a lot of work and I’m the only one who would eat it). However, my mom gave me some eggplant from her garden last week so I wanted to give it a shot! I knew I needed an easy, foolproof recipe so I turned to allrecipes.com. That would also allow me to pick something with good reviews. I chose what seemed to be the most popular eggplant parm recipe and ran with it.

This actually didn’t take as long to make as I expected it to. The dredging of the eggplant was the most tedious part of the recipe but really not too bad. And I think the final product was worth the effort! This was just as good as any eggplant parmesan I’ve ever had in a restaurant. I would have liked the cheese to be a little browner on top but short of sticking it under the broiler, I wasn’t sure how to achieve that. Since Shane doesn’t eat eggplant, I had plenty of leftovers and was able to get quite a few meals out of this recipe (though I did scale the original recipe down a bit). 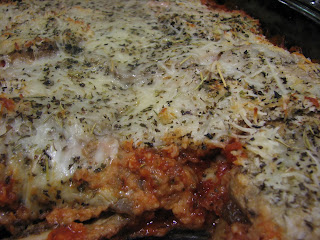 Dip eggplant slices in egg, then in bread crumbs. Place in a single layer on a baking sheet. Bake in preheated oven for 5 minutes on each side.

In a 9×13 inch baking dish spread spaghetti sauce to cover the bottom. Place a layer of eggplant slices in the sauce. Sprinkle with mozzarella and Parmesan cheeses. Repeat with remaining ingredients, ending with the cheeses. Sprinkle basil on top.

Bake in preheated oven for 35 minutes, or until golden brown.