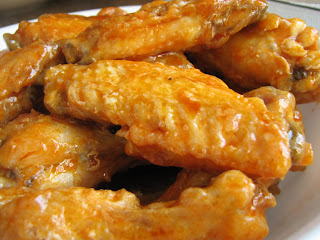 There’s really not much “recipe” here so to speak but I’ve never fried wings before and Shane thought these were delicious so I wanted to post them. I made these two weekends ago for Shane and his friends who were here playing video games. I was a bit nervous as I’ve never fried anything in my dutch oven but since I didn’t intend to eat any of these wings, I didn’t feel the need to make a healthier baked version. Fortunately, there weren’t any incidents with the oil (aside from the fact that our kitchen smelled the way I imagine the area around the deep fryer at a restaurant must…) It definitely gave me new perspective on eating fried foods. The guys, however, really seemed to enjoy these and polished them off fairly quickly. I imagine I’ll make them again at Shane’s request!

Pour canola oil into bottom of dutch oven. I had about an inch of oil in mine, which seemed to be plenty. Heat the oil over medium to medium-high heat. You want to get the oil to about 350-375 F.

Drop the chicken wings into the oil carefully. Mine was definitely splattering a bit at this point! I used tongs to drop the wings in and then used the tongs to stir the wings around in the oil as they cooked so they wouldn’t stick to the bottom of the pan. 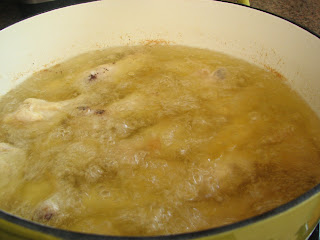 While the chicken was frying, I melted the stick of butter in a saucepan and when it was completely melted, added the cup of Frank’s Red Hot. The Pioneer Woman also adds some tabasco sauce to her sauce but I left that out. Set the sauce aside until the wings finish frying.

You want to fry the wings until they are golden and crispy. This took about 20 minutes for me. When I removed the wings from the oil I put them into a glass baking dish lined with paper towels to drain some of the oil. I left them there for a few minutes before moving them to another large bowl. 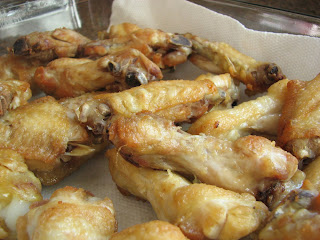 I poured all of the sauce into the bowl to cover the chicken and then tossed the wings around in the sauce to make sure they were all fully coated. Since that bowl was a mess from all the tossing, I moved the wings to another bowl for serving. I probably could have made a blue cheese or ranch sauce to go with these wings, but I didn’t because it was time for the Patriots game 🙂 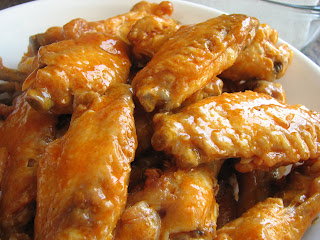 One Response to "Buffalo Wings"