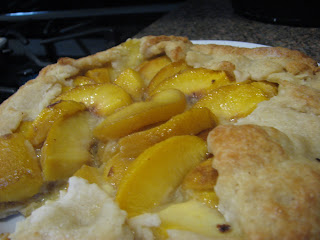 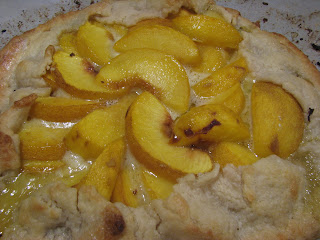 This week’s recipe was chosen by Michelle of Michelle in Colorado Springs: Summer Fruit Galette. I love fruit desserts so I was definitely excited about this recipe and giving it a shot! 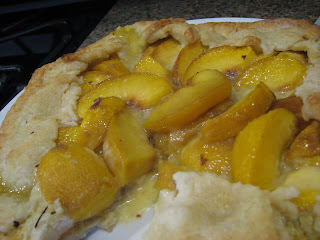 I won’t lie…..in the end, this recipe and I were not friends. Where to start…. I chose to use only peaches in my galette and I could not for the life of me get the skins off of the peaches, even after blanching them as Dorie suggested in the recipe. It was a half hour (very messy) process to get those skins off. The other big problem I ran into was with the crust. The edges of my crust were just too soft to pull up and over the fruit without a problem. I had to refrigerate the crust for quite a while just to get the crust to cooperate. I had turned the air on in our house to get the humidity and heat out so I don’t think that was the problem, but who knows.

That said, once this recipe was finally pulled together and baked, I really liked the rustic look of it! I even had a small piece this morning just so I could say I’d tasted it and I have to say it was pretty good! Despite the problems I had with the crust, it tasted incredible – definitely the best part of this dessert for me.

The galette is unlike anything I’ve ever made so I’m really glad I tried it this week! I probably won’t be rushing to make it again anytime soon but at least I made it once. Thanks to Michelle for choosing this recipe. You can find the recipe on her blog if you’re curious. Be sure to head over to TWD to see how everyone else’s galette turned out!