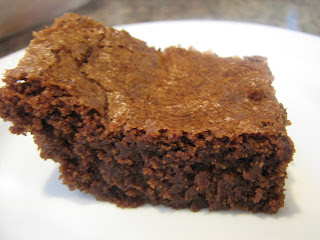 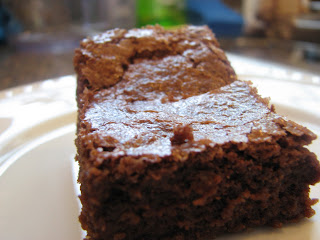 This week’s TWD was chosen by Di of Di’s Kitchen Notebook – French Chocolate Brownies! We love brownies at our house so we were definitely excited about this selection!

I did have one concern about this recipe, however. I have to confess that I’ve never flambed anything and the thought of trying it still intimidates me. I’ve improved my skills in many areas, but I’m just not quite ready to play with fire yet. Fortunately, Shane won’t touch raisins and I prefer not to mix my raisins with chocolate (unless we’re talking about Raisinets). So, alas, these brownies are fruit-free!

A lot of the other TWD bakers mentioned having problems with the top or crust of these brownies. It seems that many ran into a problem with a really hard crust forming on the top of their brownies – so much so, in fact, that the crust was completely breaking up when the brownies were cut into. I didn’t run into that problem with my brownies luckily. The top did puff up incredibly while they were baking, but it collapsed back down as it cooled. These came together easily and were fun to make.

The verdict: I thought these brownies were delightful! They were lighter than most other brownie recipes I’ve tried and also very moist. I think if I make them again I’ll substitute semi-sweet chocolate for the bittersweet as these definitely had a bit too much of that dark chocolate flavor for me. 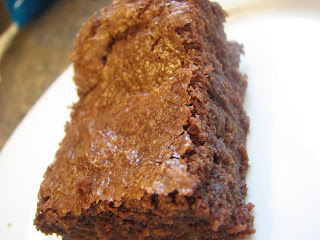 French Chocolate Brownies
From Baking: From My Home to Yours, by Dorie Greenspan 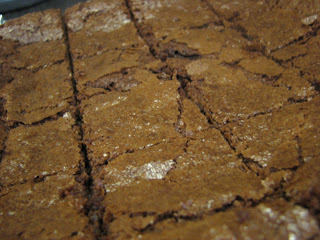 Getting ready: Center a rack in the oven and preheat the oven to 300°F. Line an 8-inch square baking pan with foil, butter the foil, place the pan on a baking sheet, and set aside.

Whisk together the flour, salt and cinnamon, if you’re using it.

Put the raisins in a small saucepan with the water, bring to a boil over medium heat and cook until the water almost evaporates. Add the rum, let it warm for about 30 seconds, turn off the heat, stand back and ignite the rum. Allow the flames to die down, and set the raisins aside until needed.

Put the chocolate in a heatproof bowl and set the bowl over a saucepan of simmering water. Slowly and gently melt the chocolate, stirring occasionally. Remove the bowl from the saucepan and add the butter, stirring so that it melts. It’s important that the chocolate and butter not get very hot. However, if the butter is not melting, you can put the bowl back over the still-hot water for a minute. If you’ve got a couple of little bits of unmelted butter, leave them—it’s better to have a few bits than to overheat the whole. Set the chocolate aside for the moment.

Working with a stand mixer with the whisk attachment, or with a hand mixer in a large bowl, beat the eggs and sugar until they are thick and pale, about 2 minutes. Lower the mixer speed and pour in the chocolate-butter, mixing only until it is incorporated—you’ll have a thick, creamy batter. Add the dry ingredients and mix at low speed for about 30 seconds—the dry ingredients won’t be completely incorporated and that’s fine. Finish folding in the dry ingredients by hand with a rubber spatula, then fold in the raisins along with any liquid remaining in the pan.

Scrape the batter into the pan and bake 50 to 60 minutes, or until the top is dry and crackled and a knife inserted into the center of the cake comes out clean. Transfer the pan to a rack and allow the brownies to cool to warm or room temperature.

Carefully lift the brownies out of the pan, using the foil edges as handles, and transfer to a cutting board. With a long-bladed knife, cut the brownies into 16 squares, each roughly 2 inches on a side, taking care not to cut through the foil.