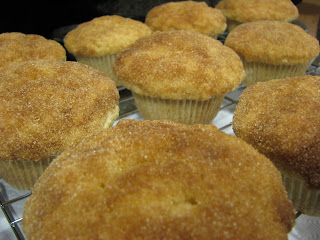 I had seen these muffins a few times while looking through my google reader. I had starred them so I could make them sometime and tonight wound up being the night! They came together quickly and I had a lot of fun dipping them in the butter and the sugar 🙂 These looked way too good not to try one so I tested one out. While I typically like my doughnuts with chocolate frosting, I’m going to make an exception for these muffins. They’re really good and they do in fact taste just like cinnamon sugar donuts! I definitely look forward to making these again soon! 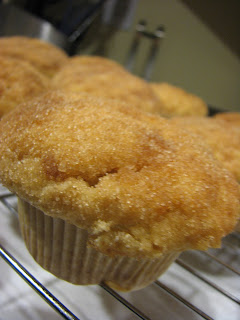 Doughnut Muffins
from Genesis of a Cook 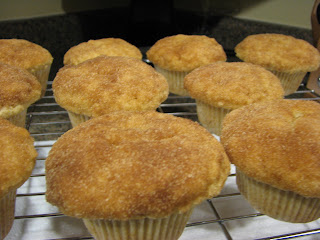 In a large bowl, cream the butter and the sugar. Beat in the eggs, one at a time, until just mixed in. In another bowl, sift together the flour, baking powder, baking soda, salt, and cinnamon. Combine the vanilla, milk and heavy cream in a measuring cup.

Scoop enough batter into each tin so that the top of the batter is even with the rim of the cup, about 1/2 cup. Bake the muffins until firm to the touch, about 25-30 minutes.

To finish, melt the butter for the dipping mixture in a small bowl. Combine the sugar and cinnamon in another bowl. When the muffins are just cool enough to handle, remove them from the tin, dip them into or brush them all over with the melted butter, and then roll them in the cinnamon sugar. 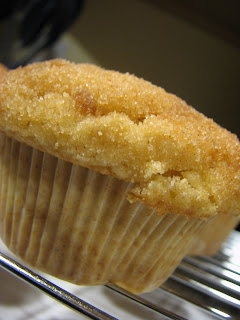