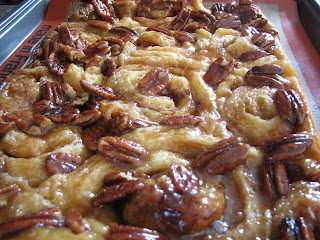 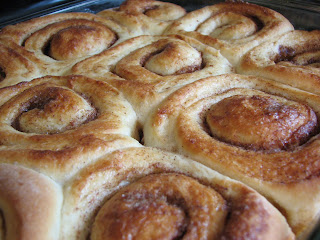 This week’s TWD recipe was chosen by Madam Chow of Madam Chow’s Kitchen and what a pick it was! Kudos to her for this fantastic selection. I’ve never made sticky buns but I made cinnamon rolls a few months ago so I was fairly confident I could pull this off. Having made the brioche loaf with the other half of the brioche dough, I knew these would probably be amazing. The brioche alone was phenomenal…never mind the addition of yet more butter plus cinnamon, sugar and honey!

I really enjoyed working with the brioche dough to make these sticky buns. The dough was far easier to work with than other yeast recipes I’ve made in the past. Generally, I run into problems rolling out the dough as it sticks to my countertop even when I am careful to flour the workspace generously. I completely avoided that problem with this dough. I did, however, fail to measure the rolls as I cut them and ended up with about 13 instead of the 15 Dorie suggested. I doubt anyone will complain about bigger rolls though…. Unlike my brioche loaf, these rolls rose fairly quickly once I cut them and placed them on top of the glaze. I baked them for about 30 minutes (all the while drooling over the most amazing smell ever coming from the oven) and they emerged from the oven gorgeous and golden! 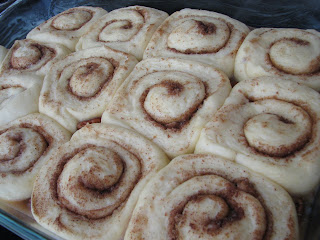 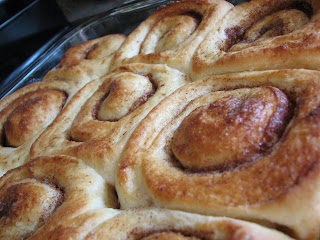 I was nervous about unmolding them as Dorie really didn’t seem to provide specific instructions on how to approach it. I wound up lining a baking sheet with my silpat and just flipped the pyrex pan over on top of it. I think I held the pan sideways too long before making the final flip as some of my glaze wound up on the silpat instead of the buns.

When these finally cooled enough, I immediately tried one and was very impressed! I’m not even a huge fan of pecans but in this recipe they worked. The sticky buns were sugary and sweet and oh so sinful! These are unbelievably rich but so worth it! I will definitely make these again at some point – they’d be a wonderful treat for any company we might have over the house.

Pecan Honey Sticky Buns
from Baking: From My Home to Yours, by Dorie Greenspan 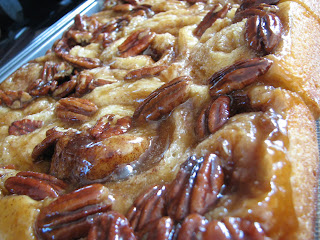 1/2 recipe dough for Golden Brioche loaves (see recipe here), chilled and ready to shape (make the full recipe and cut the dough in half after refrigerating it overnight)

Generously butter a 9-x-13-inch baking pan (a Pyrex pan is perfect for this).

To Make the Glaze: In a heavy-bottomed saucepan, bring the brown sugar, butter, and honey to a boil over medium-low heat, stirring frequently to dissovle the sugar. Pour the glaze into the buttered pan, evening it out as best you can by tilting the pan or spreading the glaze with a heatproof spatula. Sprinkle over the pecans.

To Make the Filling: Mix the sugars and cinnamon together in a bowl. If necessary, in another bowl, work the butter with a spatula until it is soft, smooth and spreadable.

To Shape the Buns: On a flour-dusted work surface, roll the chilled dough into a 16-inch square. Using your fingers or a pastry brush, spread the softened butter over the dough. Sprinkle the dough with the cinnamon sugar, leaving a 1-inch strip bare on the side farthest from you. Starting with the side nearest you, roll the dough into a cylinder, keeping the roll as tight as you can. (At this point, you can wrap the dough airtight and freeze it for up to 2 months. Or, if you want to make just part of the recipe now, you can use as much of the dough as you’d like and freeze the remainder. Reduce the glaze recipe accordingly).

With a chef’s knife, using a gentle sawing motion, trim just a tiny bit from the ends of the roll if they’re very ragged or not well filled, then cut the log into 1-inch thick buns. (Because you trim the ragged ends of the dough, and you may have lost a little length in the rolling, you will get 15 buns, not 16.) Fit the buns into the pan cut side down, leaving some space between them.

Lightly cover the pan with a piece of wax paper and set the pan in a warm place until the buns have doubled in volume, about 1 hour and 45 minutes. The buns are properly risen when they are puffy, soft, doubled and, in all likelihood, touching one another.

Getting Ready to Bake: When the buns have almost fully risen , center a rack in the oven and preheat the oven to 375 degrees F.

Remove the sheet of wax paper and put the pan on a baking sheet lined with parchment or a silicone mat. Bake the sticky buns for about 30 minutes, or until they are puffed and gorgeously golden; the glaze will be bubbling away merrily. Pull the pan from the oven.

The sticky buns must be unmolded minutes after they come out of the oven. If you do not have a rimmed platter large enough to hold them, use a baking sheet lined with a silicone mate or buttered foil. Be careful – the glaze is super-hot and super-sticky.