Update: I can safely say that I’ve tried the Florida Pie and I’m not a huge fan. Don’t get me wrong, I loved the coconut cream, but the lime filling didn’t thrill me and seeing as that’s a major part of the pie, I probably wouldn’t make it my dessert of choice. I loved making this pie though, and will definitely make it for others at their request 🙂 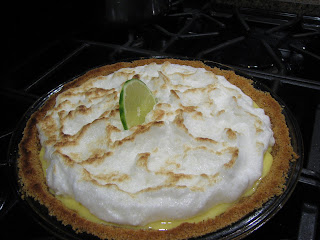 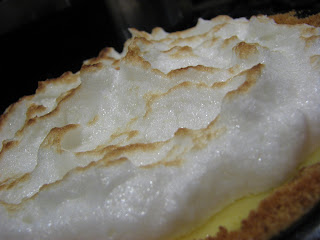 Finally!! My TWD post is incredibly late this week. I was sick all weekend and when I finally felt better I was cooking and baking for our Mother’s Day brunch and just didn’t get around to making my pie until tonight. So, let’s get to it!
This week’s TWD recipe comes courtesy of Dianne at Dianne’s Dishes and is Florida Pie. I must confess that despite numerous trips to Florida and other tropical destinations, I’ve never tried Key Lime Pie. It’s never really interested me for some reason (maybe because I always notice chocolate desserts first…) but I was still excited to try this recipe as it’s definitely something I wouldn’t have otherwise made.

I felt like I was nervous the entire time I was making the pie. First, I wondered whether my coconut cream had really reduced by half and had it thickened enough? Then I couldn’t decide if my egg yolks were pale and thick enough after I had mixed them up. Finally, the meringue definitely caused me some concern as I didn’t want to overdo the egg whites or burn them too much under the broiler. In the end, everything came together perfectly (I think) and I really like the way the pie turned out! Very rarely does my dessert look anything like Dorie’s but this week I do see the resemblance!

I did use regular limes in my pie as I didn’t have time to shop around for key limes this weekend. Also, after reading some of the other posts this morning, I added some lime zest to the filling. I haven’t had a piece yet but tomorrow I’m going to try it and will report back! 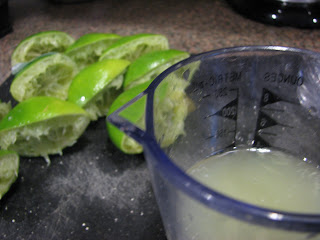 Florida Pie
from Baking: From My Home to Yours, by Dorie Greenspan 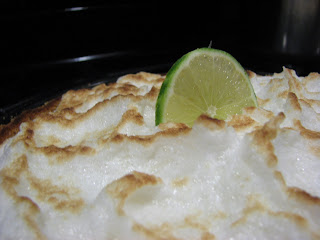 Center a rack in the oven and preheat the oven to 350 degrees F. Put the pie plate on a baking sheet lined with parchment of a silicone mat.

Put the cream and 1 cup of the coconut in a small saucepan and bring it to a boil over medium-low heat, stirring almost constantly. Continue to cook and stir until the cream is reduced by half and the mixture is slightly thickened. Scrape the coconut cream into a bowl and set it aside while you prepare the lime filling.

Working with a stand mixer, preferably fitted with a paddle attachment, or with a hand mixer in a large bowl beat the egg yolks at high speed until thick and pale. Reduce the mixer speed to low and beat in the condensed milk. Still on low, add half of the lime juice. When it is incorporated, add the reaming juice, again mixing until it is blended. Spread the coconut cream in the bottom of the graham cracker crust, and pour over the lime filling.

Bake the pie for 12 minutes. Transfer the pie to a cooling rack and cool for 15 minutes, then freeze the pie for at least 1 hour.

To Finish the Pie with Meringue:

Put the 4 egg whites and the sugar in a medium heavy-bottomed saucepan and heat over medium-low heat, whisking all the while, until the whites are hot to the touch. Transfer the whites to a stand mixer, fitted with the whisk attachment, or use a hand mixer in a large bowl, and beat the whites at high speed until they reach room temperature and hold firm peaks. Using a rubber spatula, fold the remaining 1/2 cup coconut into the meringue. 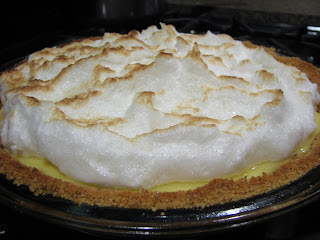 Stir the crumbs, sugar and salt together in a medium bowl. Pour over the melted butter and stir until all of the dry ingredients are uniformly moist. (I crushed the crackers and performed the rest of the steps in the food processor to make my life a little easier.) Turn the ingredients into the pie plate and use your fingers to pat an even layer of crumbs over the bottom of the pan and up the sides. Put the pan in the freezer while you preheat the oven.