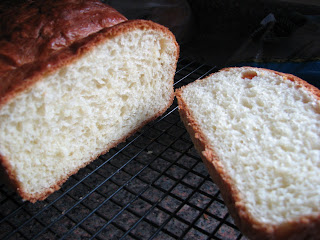 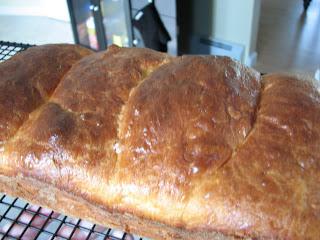 This week’s Tuesdays with Dorie was Pecan Honey Sticky Buns and the buns are made from brioche dough. Dorie’s recipe for brioche makes 2 loaves and since I only needed half of the dough for the stick buns, I decided to use the other half to make a loaf of brioche. I must confess that I’ve never had brioche but I was pretty sure that with one and a half sticks of butter it wasn’t going to be bad! 🙂

I didn’t have any problems making the dough yesterday though it did take quite a while. The butter has to be incorporated 2 tablespoons at a time and each addition took a few minutes in my mixer. Per Dorie’s instructions I stuck the dough in the fridge last night and went back to it this morning. I was a little bit worried because the dough seemed pretty hard – I wasn’t sure it would ever rise after I rolled out the logs and stuck them in the loaf pan. Fortunately, they did eventually rise though it took a little longer than Dorie indicated (closer to 2.5 hours) – surprising given that it was very warm here today. Finally it was time to bake the bread, let it cool and try a slice! 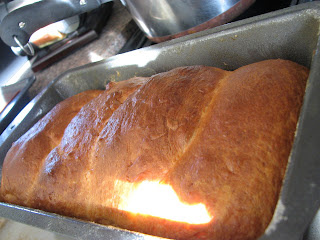 I cut an end piece for myself after the loaf had cooled for about an hour. Wow, was it good!! It tasted just like a croissant! The bread is flaky and buttery and so delicious. I quickly wrapped it as soon as I ate that first slice to restrain myself from having any more today. I suspect it is going to be very difficult to pass by tomorrow morning and not have a slice for breakfast!

Golden Brioche Loaves
from Baking: From My Home to Yours, by Dorie Greenspan

To Make The Brioche: Put the yeast, water and milk in the bowl of a stand mixer and, using a wooden spoon, stir until the yeast is dissolved. Add the flour and salt, and fit into the mixer with the dough hook, if you have one. Toss a kitchen towel over the mixer, covering the bowl as completely as you can- this will help keep you, the counter and your kitchen floor from being showered in flour. Turn the mixer on and off a few short pulses, just to dampen the flour (yes, you can peek to see how you’re doing), then remove the towel, increase the mixer speed to medium-low and mix for a minute or two, just until the flour is moistened. At this point, you’ll have a fairly dry, shaggy mess.

Scrape the sides and bottom of the bowl with a rubber spatula, set the mixer to low and add the eggs, followed by the sugar. Increase the mixer speed to medium and beat for about 3 minutes, until the dough forms a ball. Reduce the speed to low and add the butter in 2-tablespoon-size chunks, beating until each piece is almost incorporated before adding the next. You’ll have a dough that is very soft, almost like batter. Increase the speed to medium-high and continue to beat until the dough pulls away from the sides of the bowl, about 10 minutes.

Transfer the dough to a clean bowl (or wash out the mixer bowl and use it), cover with plastic wrap and leave at room temperature until nearly doubled in size, 40 to 60 minutes, depending upon the warmth of your room.

Deflate the dough by lifting it up around the edges and letting it fall with a slap to the bowl. Cover the bowl with the plastic wrap and put it in the refrigerator. Slap the dough down in the bowl every 30 minutes until it stops rising, about 2 hours, then leave the uncovered dough in the refrigerator to chill overnight.

Pull the dough from the fridge and divide it into 2 equal pieces. Cut each piece of the dough into 4 equal pieces and roll each piece into a log about 3 1/2 inches long. Arrange 4 logs crosswise in the bottom of each pan. Put the pans on a baking sheet lined with parchment or a silicone mat, cover the pans lightly with wax paper and leave the loaves at room temperature until the dough almost fills the pans, 1 to 2 hours. (Again, rising time with depend on how warm the room is.)

Getting Ready To Bake: Center a rack in the oven and preheat the oven to 400 degrees F.

To Make the Glaze: Beat the egg with the water. Using a pastry brush, gently brush the tops of the loaves with the glaze.

Bake the loaves until they are well risen and deeply golden, 30 to 35 minutes. Transfer the pans to racks to cool for 15 minutes, then run a knife around the sides of the pans and turn the loaves out onto the racks. Invert again and cool for at least 1 hour. 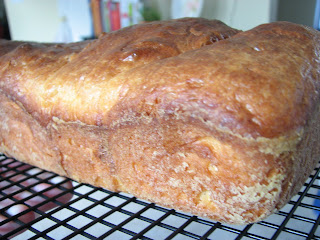