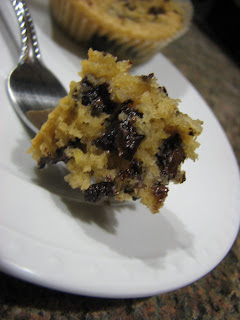 While flipping through my Cupcakes book tonight I came upon this recipe and decided to make it. I was intrigued by the mixing method mostly. I don’t think I’ve ever seen a recipe where the ingredients are combined in this manner. The cupcakes came together quickly and were soon in the oven.

We tried these after they cooled a bit and liked them. They reminded me a lot of chocolate chip muffins. In fact, that’s basically what they taste like. I’m not sure why they’re called cupcakes and how they differ from muffins. Maybe it’s because the ingredients aren’t combined the way a traditional muffin recipe would call for. In any event, I would definitely make these again. Shane thought they’d be better with frosting but I was too lazy to do that tonight. The book mentioned dusting the cupcakes with powdered sugar as an alternative to frosting and that sounded like a much better plan to me 🙂 (Note, the pictures here do not show powdered sugar on the cupcakes…I’m waiting to do that until tomorrow morning.) 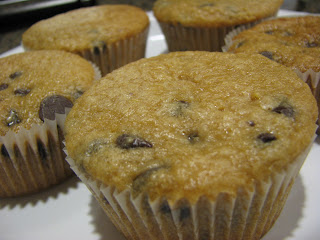 In a large bowl, using an electric mixer on low speed, mix the flour, brown sugar and baking soda to blend them. Add the butter and mix until the butter pieces are the size of peas, about 2 minutes. You will still see some loose flour. Stop the mixer and scrape the sides of the bowl as needed during mixing. Mix in the egg and vanilla. The batter will still look dry. Mix in the sour cream and milk until the batter looks evenly moistened. You may still see some lumps of butter. Mix in the chocolate chips.

Fill each paper liner with about a generous 1/4 cup of batter, to about 1/3 inch from the top of the liner. Bake just until the tops feel firm and a toothpick inserted in the center comes out clean, about 25 minutes. Cool the cupcakes for 10 minutes in the pans on wire racks before removing the cupcakes from the pans to cool completely on the racks.

Frost the cupcakes or dust them with powdered sugar prior to serving. 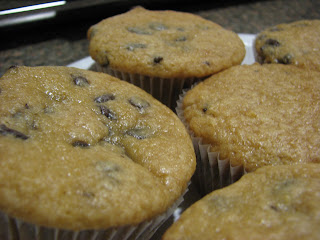