First Time for Everything 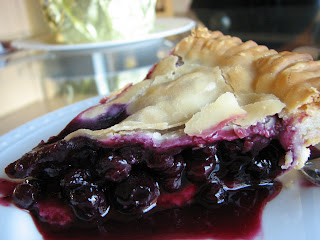 When we first moved into our house last summer, our wonderful neighbors Pete and Tori brought us a blueberry pie. I don’t recall being a huge fan of blueberry pie before that, but this pie was so amazingly good that it hooked me! I haven’t had any blueberry pie since then but I’ve been thinking about making one ever since I started baking more. I have made several attempts at pie crust in the past few months, but none of them have been successful (and therefore haven’t made it onto the blog). Since I pulled this blueberry pie recipe up on Williams-Sonoma, I decided to give their pie crust recipe a shot…..and it worked!! I was so excited that I finally successfully made pie crust! I did have one Pillsbury pie crust in the freezer so I decided not to press my luck and used that crust for the top of the pie. Well, as luck would have it, that was the crust that caused me a problem! As you’ll see in the pictures, my pie looks sick. I don’t know what happened with the top crust, but it’s not pretty. I guess what really matters is that the pie still tastes fantastic! (So good in fact that I had a piece for breakfast on Friday…oops.) I definitely recommend both the pie crust recipe and the blueberry pie recipe and I’m sure I’ll be making them again this summer!! 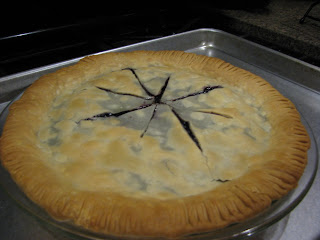 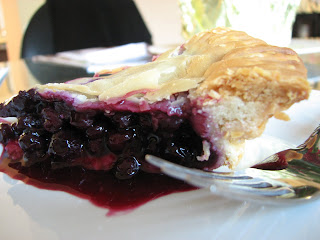 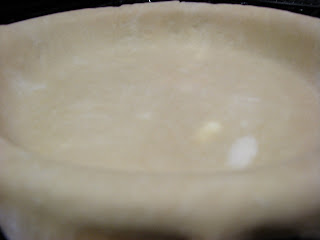 Fold 1 dough round in half and carefully transfer to a 9-inch pie dish. Unfold and ease the round into the pan, without stretching it, and pat it firmly into the bottom and up the sides of the pan. Using kitchen scissors, trim the edge of the dough, leaving 3¿4 inch of overhang. Set the dough-lined pan aside, along with the other dough round, in a cool place until ready to use.

Place the blueberries in a large bowl, sprinkle with the lemon juice and toss to coat evenly. In a small bowl, stir together the sugar, cornstarch, lemon zest, salt and cinnamon. Sprinkle the sugar mixture over the berries and toss to distribute evenly. Immediately transfer to the dough-lined pan. Dot with the butter. 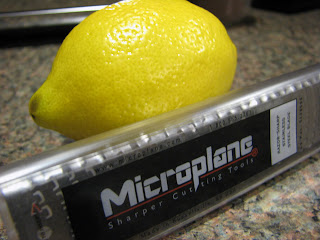 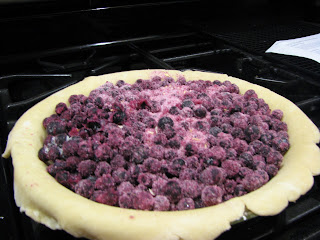 Fold the reserved dough round in half and carefully position it over half of the filled pie. Unfold and trim the edge neatly, leaving 1 inch of overhang, then fold the edge of the top round under the edge of the bottom round and crimp the edges to seal. Using a small, sharp knife, cut an asterisk 4 to 5 inches across in the center of the top to allow steam to escape during baking.

Refrigerate the pie until the dough is firm, 20 to 30 minutes. Meanwhile, position a rack in the lower third of an oven and preheat to 375°F.

Bake the pie until the crust is golden and the filling is thick and bubbling, 50 to 60 minutes. Transfer to a wire rack and let cool completely to set, 1 to 2 hours. Serve at room temperature or rewarm in a 350°F oven for 10 to 15 minutes just before serving. Makes one 9-inch pie; serves 8.

Note: If fresh blueberries are unavailable, use frozen blueberries (without thawing them first) and increase the baking time by 10 to 15 minutes. (I used frozen berries in this recipe without any problem.)

To make the dough by hand, in a large bowl, stir together the flour, sugar and salt. Using a pastry cutter or 2 knives, cut the butter into the flour mixture until the texture resembles coarse cornmeal, with butter pieces no larger than small peas. Add the water and mix with a fork just until the dough pulls together.

To make the dough in a stand mixer, fit the mixer with the paddle attachment, and stir together the flour, sugar and salt in the mixer bowl. Add the butter and toss with a fork to coat with the flour mixture. Mix on medium-low speed until the texture resembles coarse cornmeal, with the butter pieces no larger than small peas. Add the water and mix on low speed just until the dough pulls together.

Transfer the dough to a work surface, pat into a ball and flatten into a disk. (Although many dough recipes call for chilling the dough at this point, this dough should be rolled out immediately for the best results.) Lightly flour the work surface, then flatten the disk with 6 to 8 gentle taps of the rolling pin. Lift the dough and give it a quarter turn. Lightly dust the top of the dough or the rolling pin with flour as needed, then roll out into a round at least 12 inches in diameter and about 1/8 inch thick. Makes enough dough for one 9-inch single-crust pie or one 10-inch galette.

2 Responses to "First Time for Everything"