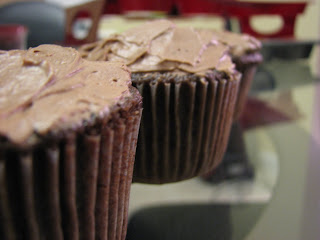 So I had a giftcard for Williams-Sonoma and went on a bit of a shopping spree the past few weeks. One of the things I got was a new cookbook containing only cupcake recipes. I like making cupcakes because they’re portable and easier to frost than an entire cake. I also feel like they’re less likely to go to waste at our house than a whole cake.

I let Shane choose the first recipe he wanted me to make from the book since he would be taking these cupcakes to work this week for a snack. He chose these basic chocolate cupcakes with chocolate buttercream frosting. I haven’t tried them, but Shane loves them! I believe what he said was “moist and chocolately cupcakes with a really light and fluffy frosting.” I will say that the recipe produced far more frosting than I needed so I think next time I would make 3/4 of the recipe.

Put the chocolate in a heatproof bowl or the top of a double boiler and place it over, but not touching, a saucepan of barely simmering water (or the bottom of the double boiler). Stir until the chocolate is melted and smooth. Remove from the water and set aside to cool slightly.

Sift the flour, baking powder, baking soda and salt into a medium bowl and set aside.

In a large bowl, using an electric mixer on medium speed, beat the butter and sugar until smoothly blended and creamy, about 2 minutes. Stop the mixer and scrape the sides of the bowl as needed during mixing. On low speed, mix in the melted chocolate. On medium speed, add the eggs one at a time, mixing until each is blended into the batter. Add the vanilla and beat until the mixture looks creamy and the color has lightened slightly, about 1 minute. Mix in the sour cream until no white streaks remain. On low speed, add half of the flour mixture, mixing just to incorporate it. Mix in the water. Mix in the remaining flour mixture until it is incorporated and the batter looks smooth.

Fill each paper liner with a generous 1/4 cup of batter, to about 1/3 inch from the top of the liner. Bake just until the tops feel firm and a toothpick inserted in the center comes out clean, about 20 minutes. Cool the cupcakes for 10 minutes in the pans on wire racks then remove the cupcakes from the pan to cool completely on the wire racks. 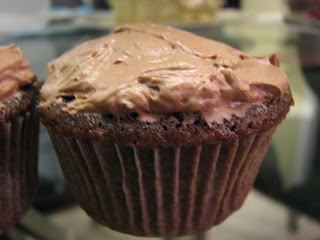 Put the chocolate in a heatproof bowl or the top of a double boiler and place it over, but not touching, a saucepan of barely simmering water (or the bottom of the double boiler). Stir the chocolate until it is melted and smooth. Remove from the water and set aside to cool slightly.

Sift the powdered sugar and cocoa powder into a large bowl. Add the butter, and using an electric mixer on low speed, beat until smoothly blended, about 2 minutes. At first the mixture will look crumbly, but then it will form a smooth mass. Beat in the melted chocolate. Add the vanilla and cream, mixing to incorporate. On medium speed, beat the frosting for at least 3 minutes, until it looks smooth and creamy and the color lightens. 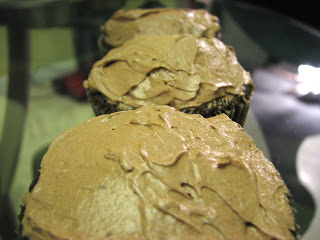