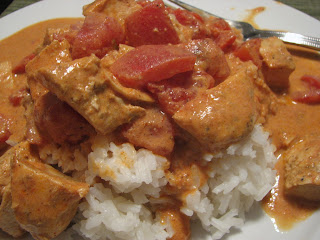 Shane and I aren’t very adventurous when it comes to new foods and we don’t usually stray too far from our comfort zone. That said, this recipe is definitely an exception to that rule. I’d seen this recipe a while ago on one of the blogs I read regularly and had been working up the courage/motivation to try it. I had the day off for the holiday yesterday and it seemed like as good an opportunity as any to finally make this recipe.

I think Shane actually like this meal better than I did, which is saying a lot since he’s far less likely to try new foods than I am. I liked it, but not enough to have it on a regular basis. I did, however, really enjoy the naan we had with our meal. Naan is a round flatbread often served with Indian cuisine. I bought the naan pre-made at the store but next time I think I’ll try making it from scratch! 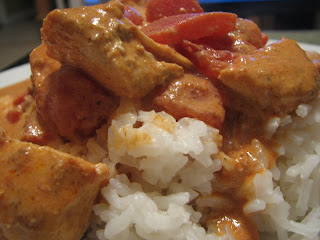 Preheat a grill for high heat. Lightly oil the grill grate. Thread chicken onto skewers, and discard marinade. Grill until juices run clear, about 5 minutes on each side.

Melt butter in a large heavy skillet over medium heat. Saute garlic and jalapeno for 1 minute. Season with cumin, paprika, garam masala and salt. Stir in tomato sauce, cream and diced tomatoes. Simmer on low heat until sauce thickens, about 20 minutes. Add grilled chicken, and simmer for 10 minutes. Transfer to a serving platter, and garnish with fresh cilantro. 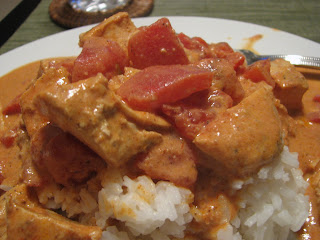