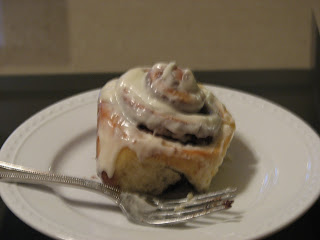 More than a month ago I saw this recipe for cinnamon rolls on one of my favorite food blogs. Ever since, I’ve been trying to work up the courage to give it a shot. Tonight was finally the night. I really liked this recipe because it provided fool proof directions for using the KitchenAid mixer as opposed to a bread machine. That said, I was still stressed about the dough and whether it was doing what it was supposed to be doing. I suppose that’s probably typical for a first experience with yeast. Hopefully, next time I use yeast it’ll be less mysterious. In the end, these turned out well. The only problem was I think I cooked them a little too long because they weren’t browning the way I thought they should. In any event, these were really tasty! I’m not sure I’ll make them again because they were a lot of work and fairly time consuming. I’ll probably move on and try another yeast recipe instead! 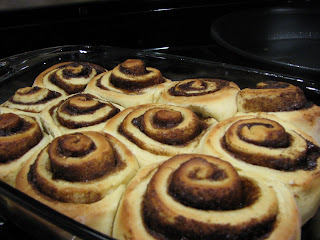 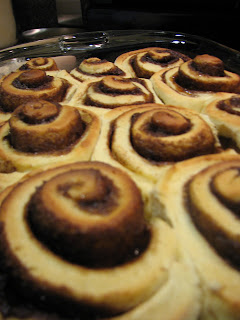 Dissolve the yeast in the warmed milk, along with 1 tsp sugar from the 1/2 cup white sugar. Let stand, covered, about 10 minutes, until foamy.

In the bowl of the KitchenAid mixer, add the yeast/milk mixture, eggs, melted margarine, 3 cups bread flour, salt, and remaining sugar; mix on medium speed with the paddle attachment until combined. Switch to the dough hook and start kneading the dough on speed 2. Add 1/2 cup of bread flour at a time, until the dough becomes soft and elastic and no longer sticks to the bowl (approximately 4-1/2 total cups bread flour according to the recipe). This will vary depending on the humidity of your kitchen, but you can tell it is done when the dough starts to follow the dough hook around in a large ball. If more flour is needed past 4-1/2 cups, add one tablespoon at a time to avoid adding too much flour. Transfer the dough to a lightly greased bowl and cover with a damp towel for approximately 1 hour, or until the dough has doubled in size.

After the dough has doubled in size turn it out onto a lightly floured surface, cover and let rest for 10 minutes. In a small bowl, combine brown sugar and cinnamon.
Roll dough into a 16×21 inch rectangle. Spread dough with 1/3 cup butter and sprinkle evenly with sugar/cinnamon mixture. Roll up dough (lengthwise so you end up with a 21 inch roll) and cut with a bread knife into 12 rolls (about 3 finger widths each). Place rolls in a lightly greased 9×13 inch baking pan. Cover and let rise until nearly doubled, about 30 minutes. 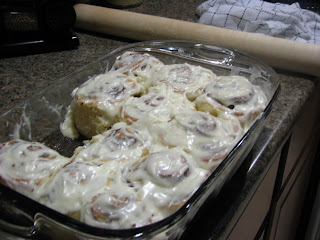 2 Responses to "Fun with Yeast…"