My very first post as a member of TWD was April 22, 2008 – Big Bill’s Carrot Cake. Now, over 13 months later I’m still baking with the group and so excited that the big week has finally arrived: my turn to choose the recipe! I’ve never gone through the book flagging possible recipes to choose when my turn came along. I figured I’d just be disappointed since many of them would have already been chosen. Instead, when I received the email asking for my selection I did a quick flip through and chose the cinnamon squares. The gorgeous picture has always caught my eye and more importantly, it’s a basic, uncomplicated recipe! As much as I love to bake, I’m a bit of a lazy baker so an easy recipe is right up my alley. It’s not the flashiest recipe in the book (in face Dorie even calls it “homey”), but I had high expectations that the cake’s flavorful combination of chocolate and cinnamon would make up for its lack of elegance.

It’s pretty rare for me to stray much from the recipe as Dorie has written it, and this week was no exception. I decided instead to make the cake from the original recipe and to make a cupcake version of the “playing around” option. 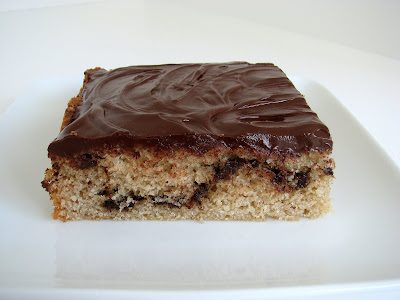 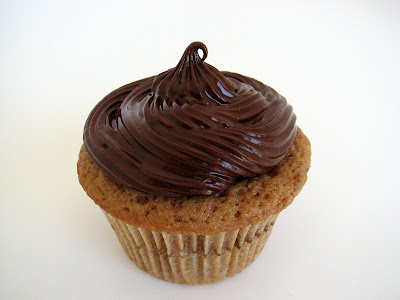 I put the cake together first. It’s a straight forward recipe – mix the dry, mix the wet and combine the two. The only exception is that the melted butter is the very last thing added to the batter. I don’t know about everyone else but when I poured the butter into the bowl I got worried. It seemed like so much liquid and I was worried the batter would never absorb it! It did eventually come together though and I got the cake in the oven. The cake was done after about 40 minutes. 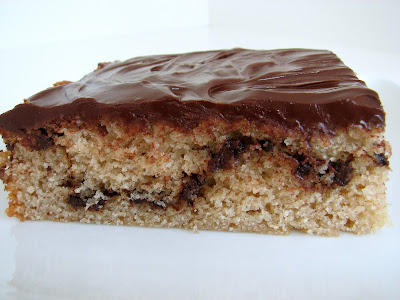 While the cake cooled, I started on the cupcakes. I infused the milk with the instant espresso as Dorie suggests for the “playing around” option. I also decided to omit the chocolate from the center layer and instead added some cinnamon chips. Cinnamon chips are pretty hard to find at my local grocery store and I’ve been hoarding this particular bag of cinnamon chips for months now but this occasion seemed as good as any to finally break into the bag! I had enough batter to make 12 cupcakes and they baked up in about 20 minutes. Originally, I hadn’t planned to frost the cupcakes and thought I would just eat them like this: However, when I tried one plain, I thought it needed something else, so I wound up frosting the cupcakes too. 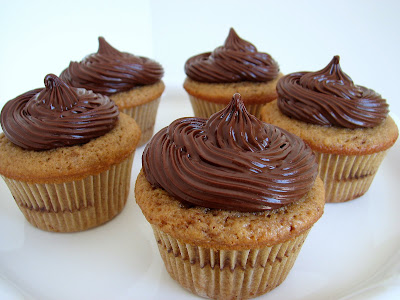 The chocolate/sugar-mixture layer in the cake didn’t have quite the same pretty wave-like look that Dorie’s did, but I was just glad the chocolate didn’t all sink to the bottom. I added more than half the batter (more like 3/4) in the pan before adding the chocolate and sugar-mixture so that may have played a role. Shane and I tried the cake tonight and we both liked it, but I’m not sure it lived up to my expectations. My cake was a bit on the dry side and I wasn’t a huge fan of the frosting.

As for the cappuccino cupcake version, I thought it was pretty neat that the cinnamon chip/sugar-mixture layer line was visible on the cupcake liner when I removed them from the tins. You can see the lines in the below photo. As for taste, I definitely preferred the cupcakes to the cake. The cupcakes were more moist and I really enjoyed the intense coffee flavor (and it was certainly intense) combined with the cinnamon. I still wasn’t a big fan of the frosting so I think when I make these again I’ll make the cappuccino cupcake version, leave it unfrosted and pair it with a big scoop of vanilla ice cream! Yum! 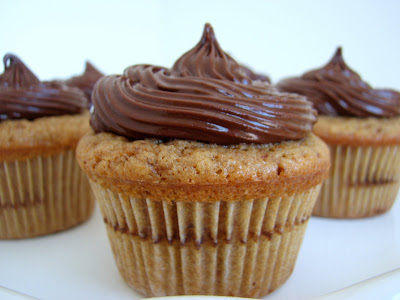 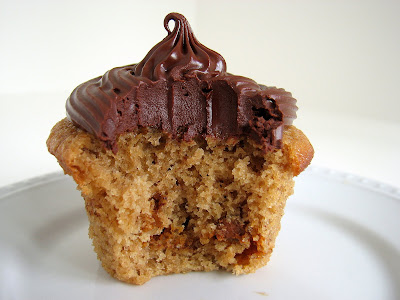 Many thanks to all of the TWD members who baked along with me this week! I’m really looking forward to reading your blogs and seeing what you thought.

Cinnamon Squares
from Baking: From My Home to Yours, by Dorie Greenspan

Getting Ready: Center a rack in the oven and preheat the oven to 350 F. Butter an 8-inch square baking pan and line the bottom with parchment or wax paper. Place the pan on a baking sheet.

To Make the Cake: Stir 2 tablespoons of the sugar, 2 1/2 teaspoons of the cinnamon and the espresso together in a small bowl.

In a large bowl, whisk together the flour, the remaining 1 1/4 cups sugar, the baking powder, salt and the remaining 1 tablespoon cinnamon. In another bowl, whisk together the milk, eggs and vanilla. Pour the liquid ingredients over the flour mixture and gently whisk until you have a homogenous batter. Now, using the whisk or a rubber spatula, fold in the butter with a light touch, just until the butter is absorbed. You’ll have a smooth, shiny batter.

Bake for 35 to 40 minutes, or until the cake is puffed and beginning to pull away from the sides of the pan; a thin knife inserted into the center will come out clean. Transfer the cake to a cooling rack and let it rest for 15 minutes before unmolding it onto another rack. Peel off the paper, invert it onto the first rack, and cool to room temperature right side up.

To Make the Frosting: Put the chocolate and butter in a heatproof bowl and fit the bowl over a saucepan of simmering water. Cook, stirring gently and often, just until they melt. Be careful not to overheat the mixture so much that it thins out; the chocolate should be smooth, very shiny, thick and spreadable. (If it thins, leave the frosting at room temperature for a bit, until it thickens a little.)

Using an offset metal icing spatula or a table knife, spread the frosting in generous sweeps and swirls over the top of the cake. Allow the frosting to set at room temperature, then cut the cake into 9 squares, each about 2 1/2 inches on a side.

Playing Around
Cappuccino Squares: If you like the cappuccino flavor combination of coffee and cinnamon, you can easily switch the balance in this recipe by adding a jolt of coffee flavor to the batter. Just mix 1 tablespoon instant espresso into the milk and warm the milk in a microwave oven until it is hot enough to dissolve the coffee. Cool the milk and carry on.

Serving: Serve the cake as is or, if you’d like, with whipped cream, creme fraiche or sour cream.

Storing: Wrapped in plastic, the cake will keep at room temperature for 2 days. It can be frozen for up to 2 months, but it’s best to put the cake in the freezer unwrapped and then, when the frosting is firm, to wrap it airtight; defrost, still wrapped, overnight in the refrigerator.

Leave a Reply to Shari@Whisk: a food blog Cancel reply