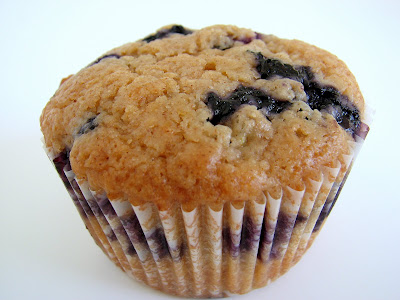 I’m incredibly excited for blueberry season to arrive because blueberries are, without a doubt, my favorite berry. Recently I picked up a pint of blueberries at the store when I saw them on sale and I debated for days about what I should make with them. Initially I thought “anything but muffins” as I tend to make muffins whenever I get blueberries. That was before I came upon this recipe for cinnamon blueberry muffins on Epicurious.com. I’d never made blueberry muffins with brown sugar and these sounded amazing. I imagined they’d be sweet and spicy and that’s exactly what they were! The muffins were also incredibly moist. I tend to like things incredibly sweet so these weren’t too sweet for me, but some of the reviewers over at Epicurious mentioned they cut back on the brown sugar a bit (many used 3/4 cup instead of one cup). Also, the cooking time suggested is 25-30 minutes but my muffins were done at closer to 22 minutes and many of the reviewers agreed that the baking time was a bit long so you might want to keep your eye on the muffins to avoid overcooking!

If you came looking for my Sweet Melissa Sundays post, I’ll have it up this afternoon so please check back later! 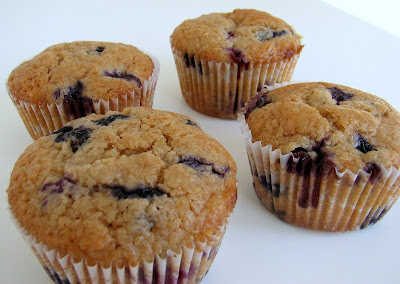 Whisk together butter, brown sugar, milk, and egg in a bowl until combined well. Whisk together flour, baking powder, cinnamon, and salt in a large bowl. Add milk mixture and stir until just combined (do not overmix). Fold in blueberries gently.

Divide batter among muffin cups and bake until golden brown and a wooden pick inserted into center of a muffin comes out clean, 25 to 30 minutes.