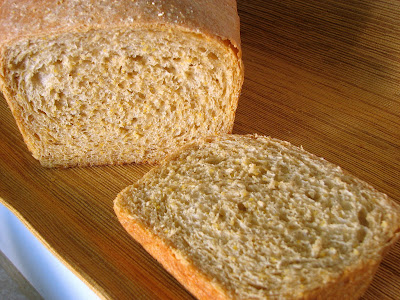 There’s a new baking group on the block and let me tell you, I came this close to hopping on board. The group is baking their way through Peter Reinhart’s The Bread Baker’s Apprentice – a truly terrific book I’ve borrowed from my library on a few occasions. After some consideration, though, I decided against joining for two reasons: 1) I don’t actually own the book and can’t justify purchasing it right now and 2) I wasn’t sure I could commit to a new group while still maintaining responsibilities for Tuesdays with Dorie and Sweet Melissa Sundays AND finding time to bake outside of “group baking”. 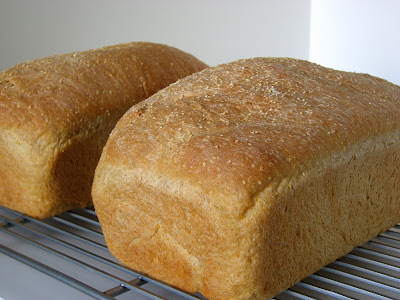 So even though I haven’t joined the group, many of my food blogging and Twitter friends have, and I’ve been following their progress (mainly on Twitter where @pinkstripes, @nancyo and @thetortefeasor are a terrific source of advice, tips, fun, etc.) The first bread the group baked was the anadama and I was intrigued because Peter Reinhart says it’s “one of the great New England breads”. Curious. Aside from a brief 3 year stint in Nashville for law school, I’ve always lived in New England and I’m pretty sure I never had anadama bread. So, of course I wanted to give this bread a shot. 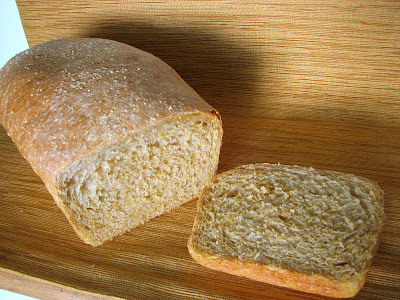 The bread starts off with a soaker made up of cornmeal and water. I’ve made some yeast breads but never one that starts with a soaker so that was a new experience. The soaker sits overnight and the next day becomes part of the bread-making process. The bread is actually really easy to make, in part because the instructions are so clear. In no time, I had two beautiful loaves of bread and there’s just nothing better than freshly baked bread. Shane and I enjoyed some of the bread that night with our dinner but it was the next day that I discovered my favorite use for the anadama bread. The bread is tender, slightly sweet thanks to a fair amount of molasses among its ingredients and fairly hearty and I just knew it would make a terrific grilled cheese sandwich. And did it ever! I made 3 more grilled cheese sandwiches after that first one and they were all out of this world. 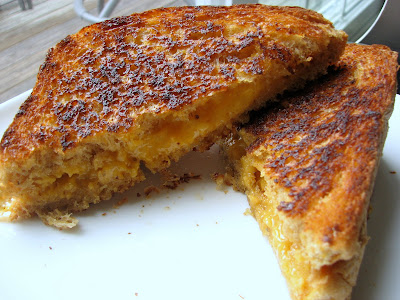 You can find the recipe for the anadama bread here. Though I won’t be joining the group, I will definitely be trying some additional recipes from The Bread Baker’s Apprentice. For more information on the group, or to see some of the other recipes they’ve made, check out their site.