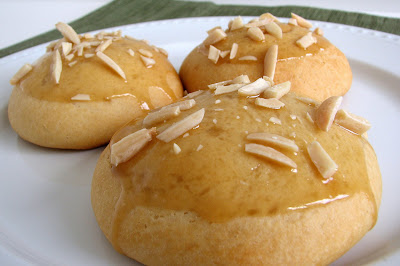 This week’s Sweet Melissa Sundays recipe was chosen by Jaime of Good Eats ‘n Sweet Treats: bee stings! Melissa created the bee stings out of her love for doughnuts. They’re basically brioche buns filled with vanilla pastry cream which are dipped in a honey caramel glaze and topped with toasted almonds. They sounded delicious and I was excited to try them! 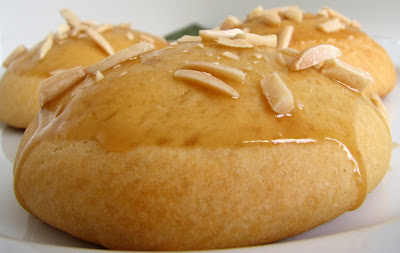 Unfortunately, luck (and perhaps skill?) were not on my side with this week’s recipe. I started off by making the brioche dough and found it pretty tricky to work with. I added a lot more flour than the recipe listed (I lost track of how much extra but at least 1/4 cup and probably even more) and I kneaded close to 20 minutes with my stand mixer, but the dough hadn’t really formed a ball and was still sticking to the sides of the bowl. I was weary about adding more flour, so I gave up and stuck it in another bowl for its first rise. It didn’t look like it rose much (even after 3 hours) but it was late and I was tired so I shaped into rolls and went to bed. The next morning, I put the rolls in the oven for the second rise. They spread a bit but didn’t rise much. I baked them anyway, and fresh from the oven I tried one. I thought it was tasty, however, as the rolls cooled they became quite dense. 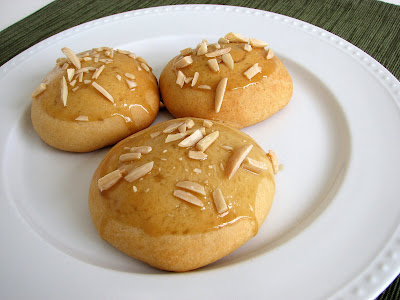 I didn’t know if they could be salvaged but I wasn’t optimistic and didn’t want to waste time and ingredients making pastry cream so I skipped ahead and made the honey caramel glaze. The glaze was really yummy and thickened up nicely as it cooled. I didn’t have any sliced almonds but I found some slivered almonds hiding in the freezer so I toasted those and topped the buns with them. I hope to make these again at some point with better results – perhaps with some of the pointers I pick up from the other bakers this week!

I always have trouble when a recipe indicates a baked good is best the day it is made. There are only two of us here so I always need to find someone to pass the treats along to and that’s a challenge on the weekends when coworkers aren’t an option 🙂 I planned to give at least 4 of the bee stings to my mailman (see below) so I was pretty bummed when the mail truck pulled up and I discovered my mailman was on vacation. His replacement was much less receptive to my baked goods so I guess I’m going to find out how the bee stings are on the second day. 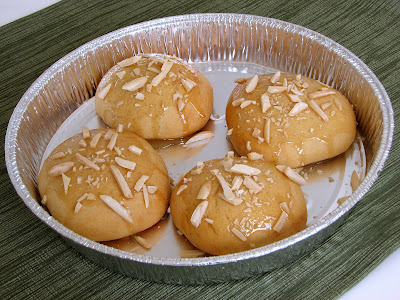 Thanks, Jaime, for a fun selection this week! You can find the recipe on her blog or in The Sweet Melissa Baking Book. Stop by the Sweet Melissa Sundays site to see the other bee stings!