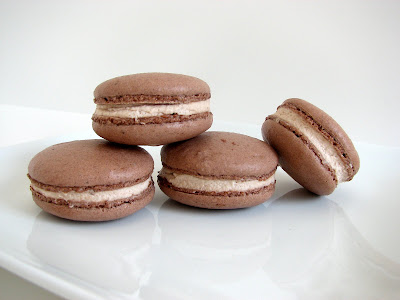 Earlier this week I posted about the banana cream pie we made for this week’s Tuesdays with Dorie. The pastry cream for that pie used 6 egg yolks, which means I had 6 egg whites for which I needed to find a use. For some crazy reason I decided macarons were the way to go. I’ve never made macarons before so I didn’t realize that they’re pretty tricky and that people tend to do a fair amount of research before they set out for their first attempt. I wasn’t deterred though. I figured even if they were a complete failure at least I’d learn something in the process.

That said, I really didn’t have the motivation to spend hours researching the best way to make macarons so I read a few resources, tried to glean the tips that were common to several of them and finally picked a flavor and got to work! Turns out just about all of the recipes I found listed the ingredients by weight and since I don’t have a great kitchen scale, that just wasn’t going to work. I went with a recipe for chocolate macarons from Art of Dessert, whose author had kindly converted everything to volume measurements!

The main problem I ran into with these macarons was with folding the almond mixture into the egg whites. Everything I read said you wanted to fold until the mixture “flowed like magma”. I don’t know about you, but I don’t find that to be a terribly helpful statement. This folding process is such a critical step in ensuring the success of your macarons (overmix and you’ll likely end up with flat macarons missing the much sought after “feet”) and yet it’s so vaguely described. I suspect with a little practice it’s just something you get a feel for, but for a first-timer, it’s quite intimidating. 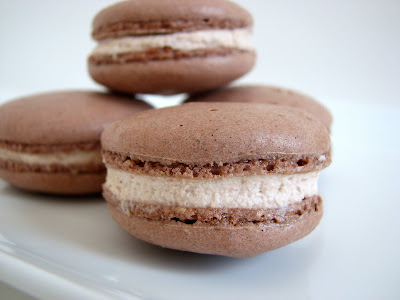 In the end, I’m pretty sure I overmixed my batter a bit. Frankly, I was surprised they turned out looking as good as they did but they weren’t without their problems. I think they were a bit flat and their “feet” could have been bigger. Not bad for a first attempt but certainly room for improvement. They actually tasted really good too! I liked them more than I expected to. They were, however, a bit gooey inside, almost like they were slightly raw. I can’t wait to try them again (maybe a different flavor?) to see if I can improve upon my results.

Below are links to many of the sites I found useful in attempting macarons for the first time, and hopefully they’ll help you if you decide to give these a shot (and I highly recommend that you do!) 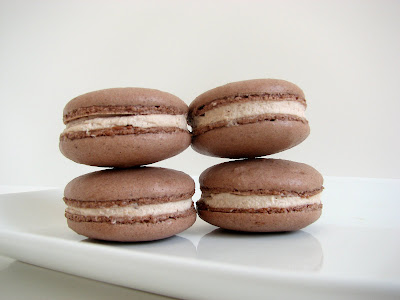 On parchment paper, use a pencil to draw 1.5 inch circles about 2 inches apart (number of sheets of parchment used will depend on how many macarons you decide to make). Flip each sheet over and place on a baking sheet.

In the bowl of an electric mixer fitted with the whisk attachment, start whipping the egg whites until foamy. Gradually add the granuated sugar to the egg whites. Increase the speed of the mixer and continue whipping until you achieve stiff peaks (the egg whites will be shiny and firm).

Sift the ground almonds, powdered sugar and cocoa powder. Gradually fold the almond mixture into the egg whites with a rubber spatula until completely incorporated. Add a few drops of red food coloring and mix until combined.

Attach a round piping tip (about 3/8 – 1/2 inch wide) to a pastry bag and fill it with the macaron batter. Pipe the macaroons in the previously drawn circles. Tap the bottom of the baking sheet to remove any air bubbles. Leave the macarons at room temperature for one to two hours to let their shells harden. 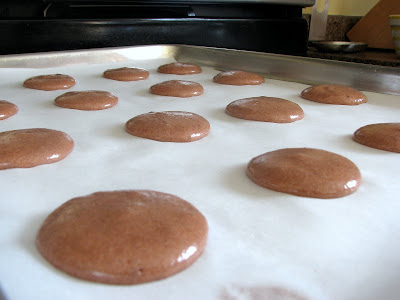 Preheat oven to 325 F. Bake the macarons for about 10-11 minutes, keeping the door of the oven slightly ajar. Rotate the baking sheet after 5 minutes. Let the macarons cool completely on a rack before removing them from the parchment paper. The macarons can be filled with any topping you choose! I whipped some heavy cream and folded in a bit of nutella before piping it between the macarons.