The Easiest Lunch TWD: Layered and Round French Yogurt Cake! 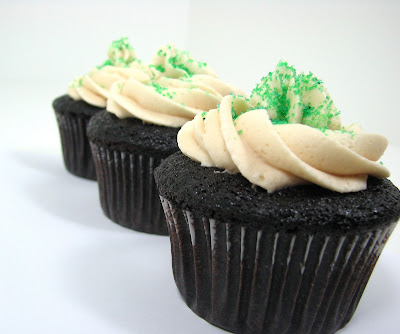 Though I made cookies last week, I still wanted to make one more treat to celebrate St Patty’s Day. As I thought about possible recipes, I kept coming back to the chocolate whiskey and beer cupcakes I’d seen on Smitten Kitchen a few months ago. They’re modeled after the Irish car bomb drink – a shot glass with a mix of Baileys Irish Cream and Jameson’s Irish whiskey is dropped into a three-quarters full pint of Guinness and then chugged quickly! I knew Shane would love them and since he’d be bringing them to work, that was important. Plus, they just looked really fun and festive!

As a general rule, I think cupcakes are a lot of work. You have to make the cupcakes, let them cool, make the frosting and then ice and decorate the cupcakes. These cupcakes take things a step further because additionally, you have to cut out the centers of the cupcakes, make a ganache filling and then fill the cupcakes before you can frost them. All that said, I definitely think these unique cupcakes are worth all that effort! The cupcake recipe is delicious (so moist and such great chocolate flavor!) and I think even if you skipped the ganache filling and just did the frosting you’d still have an amazing treat.

Two quick notes about the frosting: The Baileys flavor is quite intense so I wouldn’t recommend these to someone who is not a Baileys fan. Substitute milk or heavy cream for the Baileys if you still want to make them. The alcohol in the cupcakes and ganache filling is very mild in comparison. Second, the recipe didn’t yield enough frosting for me to ice all of my cupcakes. Next time I’d definitely make one and a half times the amount of frosting. 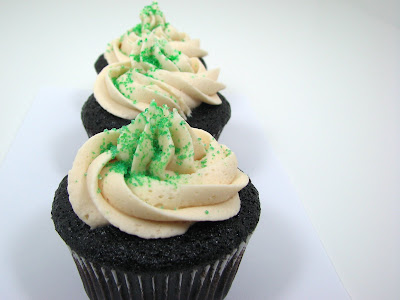 Whisk flour, sugar, baking soda, and 3/4 teaspoon salt in large bowl to blend. Using electric mixer, beat eggs and sour cream in another large bowl to blend. Add stout-chocolate mixture to egg mixture and beat just to combine. Add flour mixture and beat briefly on slow speed. Using rubber spatula, fold batter until completely combined. Divide batter among cupcake liners, filling them 2/3 to 3/4 of the way. Bake cake until tester inserted into center comes out clean, rotating them once front to back if your oven bakes unevenly, about 17 minutes. Cool cupcakes on a rack completely.

To make the filling: Chop the chocolate and transfer it to a heatproof bowl. Heat the cream until simmering and pour it over the chocolate. Let it sit for one minute and then stir until smooth. (If this has not sufficiently melted the chocolate, you can return it to a double-boiler to gently melt what remains. 20 seconds in the microwave, watching carefully, will also work.) Add the butter and whiskey (if you’re using it) and stir until combined.

To fill the cupcakes: Let the ganache cool until thick but still soft enough to be piped (the fridge will speed this along but you must stir it every 10 minutes). Meanwhile, using the cone method or a small circular cutter, cut the centers out of the cooled cupcakes. A slim spoon or grapefruit knife will help you get the center out. Put the ganache into a piping bag with a wide tip and fill the holes in each cupcake to the top. 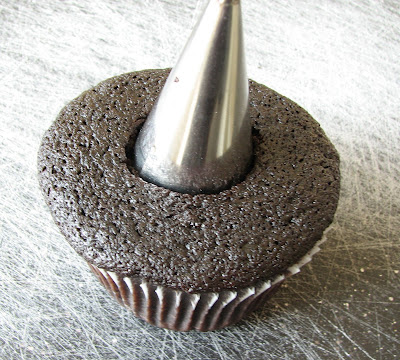 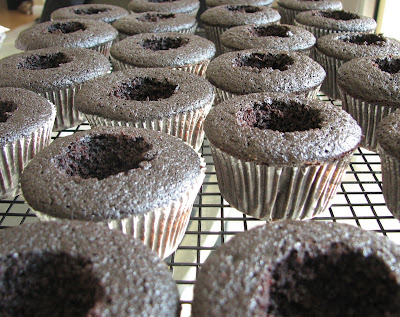 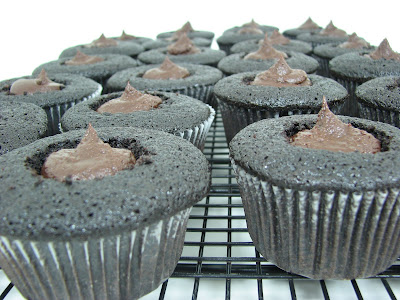 To make the frosting: Whip the butter in the bowl of an electric mixer, or with a hand mixer, for several minutes. You want to get it very light and fluffy. Slowly add the powdered sugar, a few tablespoons at a time.
When the frosting looks thick enough to spread, drizzle in the Baileys (or milk) and whip it until combined. If this has made the frosting too thin (it shouldn’t, but just in case) beat in another spoonful or two of powdered sugar. Ice and decorate the cupcakes as desired.