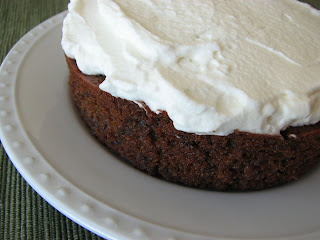 I made a few modifications to the recipe based on what I had available as well as what I was in the mood for. This recipe calls for ground ginger, fresh ginger and stem ginger in syrup. That sounded like a lot of ginger to me and many of the other TWD bakers agreed so I used only ground ginger in my version. I actually bought some fresh ginger to use, but decided against it at the last minute. Also, Dorie frosts the cake with a chocolate frosting, but after seeing Caitlin’s post this morning I knew I was going to go with whipped cream! 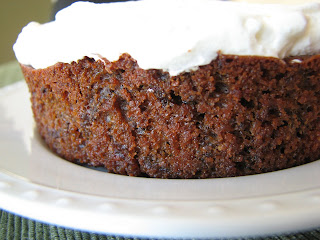 This week was a comedy of errors for me. I didn’t have a 9 x 9 pan as the recipe calls for so I used an 8 x 8 pan as well as a few ramekins. The cakes in the ramekins baked up beautifully and released without a problem. The cake in the 8 x 8 wasn’t as cooperative. After 45 minutes I tested the cake and my knife came out clean so I took it out of the oven to cool. When I unmolded the cake 10 minutes later, I was surprised to discover the the center was quite raw! So, I had to figure out how to get the cake back into the pan so I could cook it a bit more. It was a messy endeavor but I did get it back in. I baked it for another 10-15 minutes and took it out again. The center was pretty ugly (sort of concave) and when I unmolded the cake, a few pieces of the center of the cake stuck to the pan. So, with a concave center on top and some missing pieces on the bottom center, this wasn’t a pretty cake! Fortunately, whipped cream was a great cover for this cake’s problems. 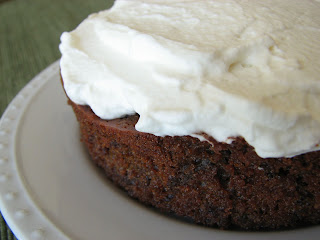 I did try a few bites of one of the smaller cakes I made in the ramekin and thought they were delicious! I’m not a huge fan of gingerbread so it wouldn’t be my first choice for cake, but I did enjoy it. You can find the recipe on Heather’s blog. Also, be sure to check out TWD to see how the other bakers fared!

Leave a Reply to Cooking for Comfort by Jennifer Cancel reply