Happy New Year everyone! This has been a great year in so many ways. I’ve had a fun year in the kitchen conquering recipes I never could have imagined trying just a year ago. I love reading other food blogs and am constantly amazed by the food people are creating in their kitchens. They certainly motivate me. Thank you to everyone who has visited my blog this year! I always enjoy reading your comments and suggestions. I hope you’ll continue to visit in 2009 and maybe I’ll inspire you to try a new recipe!

Speaking of recipes, I still haven’t finished posting my holiday goodies. I want to try to get them all up by the end of the day so let’s get to it. I mentioned previously that I made two cookie trays this year and I’ve blogged about the first one. Here is the second one! It included six different treats. I was adventurous and tried mainly recipes I’d never used before with mostly positive results. As I did with my post about the first cookie tray, I’m just going to include a link to each recipe along with any comments I have. 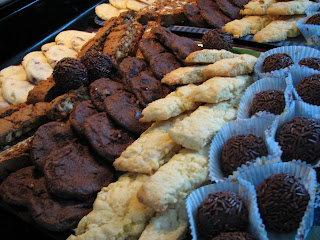 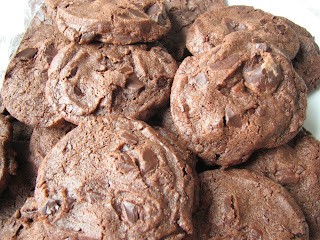 World Peace Cookies
I chose these mostly for Shane’s benefit as I knew this cookie tray wouldn’t include many other treats he’d like. He’s not one to turn down a chocolate cookie so I knew these would be popular with him. The recipe comes from Dorie Greenspan’s popular Baking: From My Home to Yours and Dorie delivered again. I’m not usually a big fan of chocolate cookies but these were delicious! I think they were also the most popular on the cookie tray as they were the first to disappear! 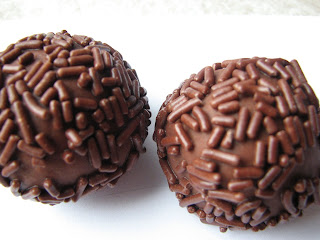 Chocolate Rum Balls
I started watching a show called The Cooking Loft on Food Network not too long ago. It is hosted by Alex Guarnaschelli, the executive chef at a restaurant called Butter in NYC. She’s incredibly entertaining and makes food fun. She made these a few weeks ago on the show and I knew I wanted to give them a try. I should clarify. I wanted to try making them, not eating them. I knew they’d be too rich for me. As it turns out, I think they were too rich for just about everyone. Shane liked them and I think a few other people commented they were good but I know most people couldn’t even finish one because they were so rich. 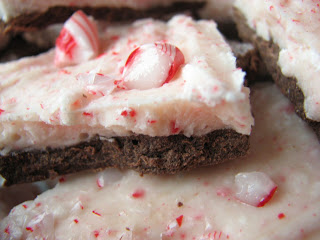 Peppermint Bark
I had never seen peppermint bark until last year but this year I felt like it was everywhere I looked. It’s such a festive looking treat that I thought it would be a fun addition to the trays. It’s also really simple to make. I had a minor problem in that I didn’t let the first layer of chocolate set quite enough before I spread the white chocolate on top so I had a little bit of blending of the two. It still looked great though and was tasty. 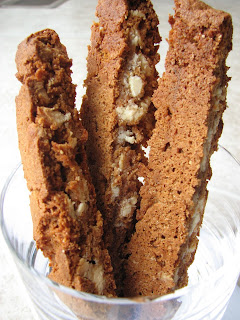 Gingerbread Biscotti
Gingerbread is such a classic holiday flavor I knew I wanted to include a gingerbread treat. These biscotti were a fun change from gingerbread cookies! The recipe I used called for cinnamon chips in the biscotti but I couldn’t find them anywhere so I substituted white chocolate chips. I don’t make biscotti often and I still struggle with knowing when to take them out of the oven after the second bake. I overcooked these a tad so they were quite crunchy. They had wonderful flavor though and I’m sure would have been a good treat for dunking in coffee or tea! 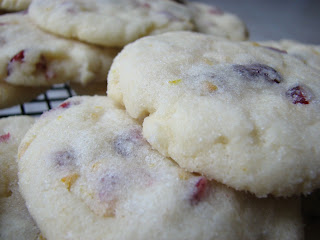 Cranberry Orange Cookies
These cookies are another product of my recent obsession with cranberries. Plus, I thought they’d be lighter than the really rich chocolate cookies and rum balls on the cookie tray. I also thought they were a pretty cookie with the specks of orange zest both in the cookies and in the sugar they’re rolled in prior to baking. I was a bit disappointed in these cookies. They looked great, but I thought they lacked in flavor. I think it’s a good base recipe but next time I make these I’d tinker with it a bit to try to create less bland cookies.

Almond Biscotti
I didn’t take an individual picture of the biscotti but you can see them on the cookie tray above if you look closely. This is my second time trying this recipe for almond biscotti. The first time I had a lot of trouble shaping the dough and cutting the biscotti after the first bake in the oven. This time didn’t prove any different. I don’t know what I’m going wrong but I think that next time I want to make almond biscotti I’ll be trying a different recipe. I should mention that the finished biscotti actually taste good, but I’d love to find a recipe that produces a more cooperative dough.