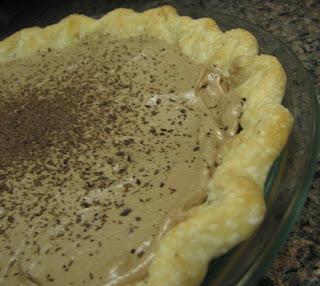 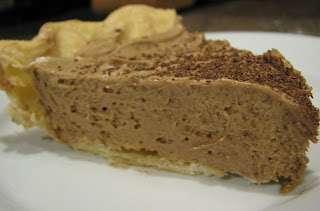 I should start by saying that this is a recipe that honestly didn’t appeal to me at all. I am not a chocolate pie kind of person (give me apple or blueberry instead any time). I made it because (a) I had an extra pie crust in the fridge I needed to use, (b) I thought Shane would like it and (c) it was just about the easier pie recipe I could find. In fact, this recipe had so few ingredients I was skeptical that it was going to work out. What really made me nervous was that the recipe calls for only 1 oz of chocolate. That just didn’t seem like enough for an entire pie.

Well, as you can see from the pictures, it did work out! I should reiterate how easy this pie is. It does take a little time to make since you need to beat 5 minutes after each egg is added but if you’re using a stand mixer you can walk away while it works. Shane wasn’t terribly excited about this pie but after trying his first piece he was hooked! He ate a second piece immediately and had a big serving the next night too! The pie has an incredibly light and smooth texture and surprisingly good chocolate flavor given the small amount of chocolate in the recipe. I think next time I make it I’ll try a chocolate cookie crust. We skipped the whipped cream on top of the pie because Shane doesn’t like it, but I bet it would be good! 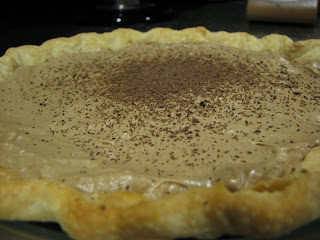 In a the bowl of an electric mixer fitted with the paddle attachment, cream together butter and sugar until light and fluffy. Beat in chocolate and vanilla extract. Add in one egg and beat at medium speed for 5 minutes. Scrape down sides of bowl. Add in the second egg and beat for an additional five minutes. Mixture should be very light and smooth.

Pour into pre-baked pie crust and smooth with a spatula. Refrigerate for at least 2 hours before serving, until firm. Serve cold, with whipped cream and chocolate shavings, if desired.

One Response to "French Silk Pie"