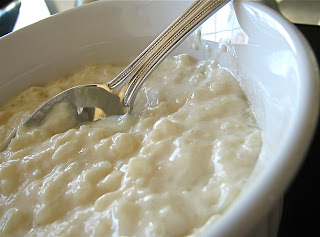 This week’s TWD was chosen by Isabelle of Les gourmandises d’Isa: arborio rice pudding! I’m not much of a pudding person but since I missed last week’s recipe, I definitely wanted to participate. Luckily, I didn’t have much trouble finding someone willing to take some rice pudding off of my hands 🙂

I enjoyed the simplicity of this week’s recipe a lot. When I looked up the recipe and saw that it only had a few ingredients I was excited! I did decide to splurge and grab some whole milk for the pudding. Generally, when a recipe calls for whole milk I’ll substitute 1% (which is what we usually have around) but I figured with so few ingredients, whole milk was the way to go. I also struggled with deciding whether to make the chocolate or vanilla pudding as Dorie includes both options. Initially I was going to make chocolate but after reading that many of the other TWD bakers found the chocolate pudding too rich, I decided to stick with vanilla. I was also really pleased that I read what the other bakers had to say about this recipe before I set out to make it as there is a typo in Dorie’s book and the pudding needed almost double the amount of time indicated in order to absorb the milk! As I transferred the pudding to the ramekins I did sneak a little taste and surprisingly, I didn’t hate it! I know that’s not a glowing endorsement, but pudding is really not my thing so that’s about as strong a recommendation as you’ll get from me on a pudding recipe! 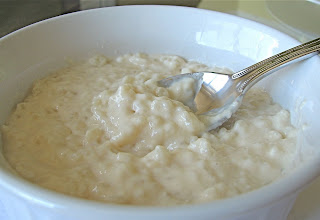 Many thanks to Isabelle for her selection this week. If you’d like the recipe for this rice pudding be sure to check out Isabelle’s blog here. As always, head over to TWD to see all of the creations by the many, many TWD bakers!