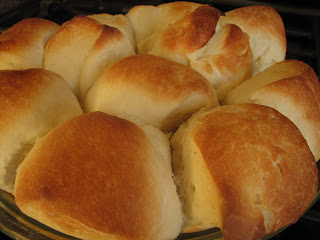 It’s been a long time since I’ve made bread and since it’s Sunday and it’s fairly chilly outside, I knew warm homemade bread was just what we needed this afternoon! Originally I was going to make wheat bread, but as I was looking for that recipe in my google reader, I came across another recipe I’d starred recently which called to me even more! Since I love rolls, especially when they’re slightly sweet, and Shane won’t eat wheat bread, these honey yeast rolls were a great choice! This is a really easy yeast recipe and well worth the effort! These rolls were amazing! I will definitely be making them many times this winter! 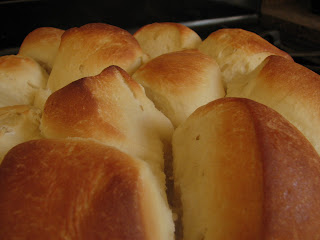 In the bowl of an electric mixer fitted with the paddle attachment, combine the yeast and warm water. Add the honey, oil, salt, and egg and mix well. Add 3 cups of the flour and mix until the dough comes together in a sticky mass. With the mixer on low speed, add the remaining 1 cup flour and mix until it is incorporated into the dough. Switch to the dough hook, and continue kneading on low speed until the dough is smooth and elastic, about 8 minutes.

Form the dough into a ball and transfer to a lightly oiled bowl, turning once to coat. Cover the bowl with a damp kitchen towel and let the dough rise in a warm, draft-free spot until it doubles in bulk, about 2 hours.

Turn the dough out onto a lightly floured surface and knead for 30 seconds. Cover and let rest for 10 minutes.

Punch the dough down and divide into 12 equal portions. Shape each portion into a ball and place into a round, lightly greased baking dish, spacing evenly. Cover and let rise in a warm, draft-free place for 20 minutes. Mix together the melted butter and honey, and brush lightly over the tops of the rolls. Bake at 400 F for 13-15 minutes or until lightly browned. Serve warm or at room temperature.