Happy Halloween everyone! I have to confess that I’m a bit of a grinch when it comes to Halloween. I don’t like parties and I don’t like wearing costumes. That said, I do have fun passing out candy to the trick or treaters and I also enjoy decorating our house for Halloween. This year we grabbed a few pumpkins but instead of carving them, we dressed them up using Mr Potato Head pieces. It might seem like taking the easy way out and I suppose it is. Pushing the Mr. Potato Head pieces into the pumpkins is so much easier and quicker than carving and the pumpkins don’t seem to rot as quickly as they do when we carve them. Oh, and these Mr Potato Head pumpkins are cute! This year mine was a princess and Shane’s was a combination vampire/pirate. 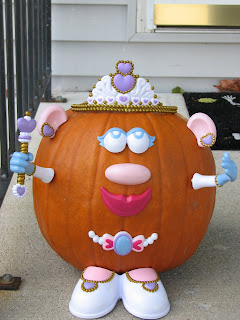 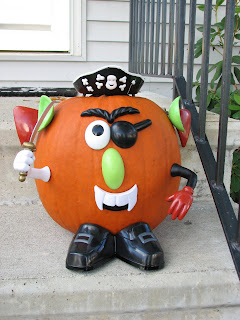 Shane’s office is having a party tomorrow and I baked two treats for him to bring, which I’ll have up the blog later tonight or tomorrow so keep an eye out!