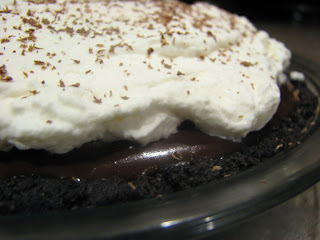 I record every episode of Martha Stewart’s talk show on my DVR but I don’t generally watch them. I simply fast forward through until I see Martha cooking or baking something. I’ll stop to see what it is and if it’s something I think I’d make, I watch. Otherwise, the episode gets deleted. I love being able to see something made as opposed to just reading a recipe and I find that it helps clarify any uncertainty in the recipe for me. This chocolate pie was featured on the show recently and I immediately thought of Shane. I’ve been trying to come up with something new to make him for his Halloween party at work and this fit the bill. 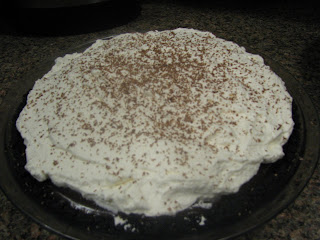 For the most part, this is a really simple recipe. The only thing that made me nervous was the filling. I had tried (twice) to make pudding a few weeks ago and had failed miserably so when I realized this filling was a variation on those pudding recipes, I was worried. Maybe I’m missing something, but I feel like it’s incredibly tough to judge that exact moment between soupy pudding and way too thick (ruined) pudding. I think I may have gotten it right this time, but I’m not even 100% sure. I had Shane taste the filling after I added the chocolate and he seemed to like it so that was good enough for me! After I topped the pie with whipped cream I shaved some chocolate over the top and loved the effect. I’ll be waiting on the final verdict on the pie from Shane and his coworkers but I would definitely make it again if he likes it! 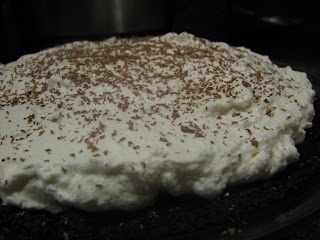 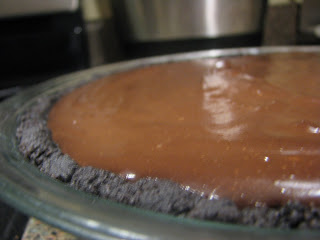 Make the crust: Place cookies in the bowl of a food processor and process until a fine powder is formed. You should have about 1 1/2 cups. Transfer crumbs to a medium bowl and stir in sugar. Add melted butter and mix until well combined; mixture should feel wet.

Turn crust mixture out into a 9-inch round pie plate. Using the back of a large spoon, press the mixture evenly into the bottom and up the sides. Transfer crust to freezer.

Make the filling: In a medium saucepan, whisk together sugar, Ovaltine, salt, and cornstarch. Add egg yolks and whisk until combined; mixture will look like a thick paste. Slowly pour in milk and cream, whisking constantly. Bring to a boil over medium heat, whisking constantly; let boil for 30 seconds and immediately remove from heat.

Add chocolate, whiskey, and vanilla; whisk until well combined and mixture has cooled slightly. Let stand, at room temperature, for 15 minutes. If a thin skin forms on the filling while cooling, whisk until skin is gone. Remove pie crust from freezer and pour filling into the crust. Refrigerate for 4 hours before serving.