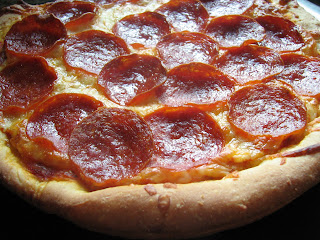 I love pan pizza. It is, without a doubt, my favorite type of pizza. While we’ve made some pretty good pizzas at home before, we’ve never had a recipe for a great pan pizza…..until now. I have to credit America’s Test Kitchen for this recipe. I watched this episode and they said their goal was to create a pan pizza recipe that would be just as good as take out and wouldn’t take too long to make. I’d say it took me about an hour and a half from when I started making the dough until we had pizza on the table. It’s maybe a bit more time than I’d spend on a weeknight, but no problem for a weekend night. The recipe below makes enough dough for 2 pizzas so if you made the entire recipe and stuck half the dough in the freezer for another time that would significantly cut down on the time it would take to make this pizza.

This pizza was definitely a hit at our house! The dough was easy to make and easy to work with. I had no problem rolling it out and stretching it to fit in the pan. One of my biggest complaints about pepperoni pizza is all the grease that usually pools on the surface of the pizza. Yuck! They’ve solved that problem in this recipe by pre-cooking the pepperoni in the microwave. The pizza looked so much more appetizing when it came out of the oven without all that grease! Best thing about this pizza though is the crust! It is delicious – golden and crunchy and just perfect! I have a feeling that second half of the dough will be coming out of our freezer before too long… 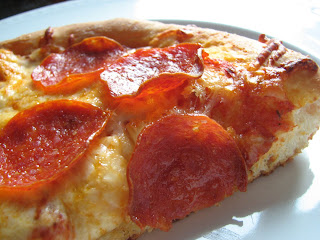 To Make the Sauce
Cook oil and garlic in medium saucepan over low heat until fragrant, about 2 minutes. Add tomatoes, increase heat to medium, and cook until slightly thickened, 10 to 15 minutes. Season with salt and pepper.

To Make the Dough
Adjust oven rack to lowest position and heat oven to 200 degrees. When oven reaches 200 degrees, turn it off. Lightly grease large bowl with cooking spray. Coat each of two 9-inch cake pans with 3 tablespoons oil.

Mix milk, sugar, and remaining 2 tablespoons oil in measuring cup. Mix flour, yeast, and salt in standing mixer fitted with dough hook. Turn machine to low and slowly add milk mixture. After dough comes together, increase speed to medium-low and mix until dough is shiny and smooth, about 5 minutes. Turn dough onto lightly floured counter, gently shape into ball, and place in greased bowl. Cover with plastic wrap and place in warm oven until doubled in size, about 30 minutes.

To Shape and Top the Dough
Transfer dough to lightly floured counter, divide in half, and lightly roll each half into ball. Working with 1 dough ball at a time, roll and shape dough into 9 1/2-inch round and press into oiled pan. Cover with plastic wrap and set in warm spot (not in oven) until puffy and slightly risen, about 20 minutes. Meanwhile, heat oven to 400 degrees.

Remove plastic wrap from dough. Ladle 2/3 cup sauce on each round, leaving 1/2-inch border around edges. Sprinkle each with 1 1/2 cups cheese and top with pepperoni. Bake until cheese is melted and pepperoni is browning around edges, about 20 minutes. Remove from oven; let pizzas rest in pans for 1 minute. Using spatula, transfer pizzas to cutting board and cut each into 8 wedges. 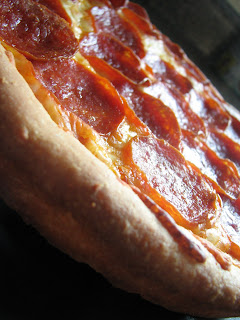