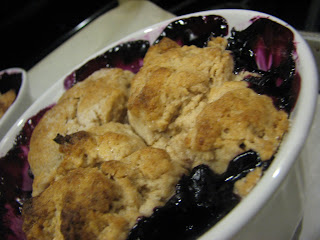 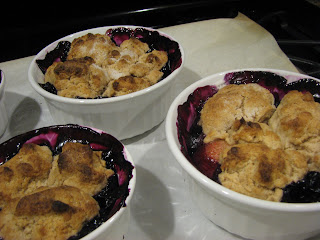 This week’s recipe was chosen by Beth of Our Sweet Life and is a mixed berry cobbler! This selection made me happy for two reasons. First, the recipe didn’t look too complicated which meant it wouldn’t take me an entire day to make it and I wouldn’t have to spend a lot of money to buy ingredients that weren’t already in my fridge or pantry. Also, as I think I’ve mentioned before, I love the simplicity of a fruit dessert. So, needless to say, I had high expectations for this recipe.

I don’t want to say I was disappointed in the final product, but let’s just say it wasn’t my favorite and I probably won’t make it again. First, I ran into a problem with the dough. I don’t know what happened, but my dough just wouldn’t come together. It was crumbly and messy. For that reason, I would up doing drop biscuits on top of the fruit instead of rolling the dough out into a nice circle. Also, some others had commented that the topping was bland. I added extra sugar to the dough as well as cinnamon and nutmeg but I still wasn’t blown away.

I would up making my cobbler in several small ramekins. I’m not sure I could call my cobbler “mixed berry” as it was 95% blueberries. I’m not a huge blackberry fan and raspberries were pretty expensive so I went with all blueberries and a few strawberries. The fruit portion of the dessert was very good….I’ll just have to work on the topping if I try it again!

Be sure to head over to TWD to see the other bakers cobblers. Every week I see the most amazing photos over there and I’m sure this week will be no exception! 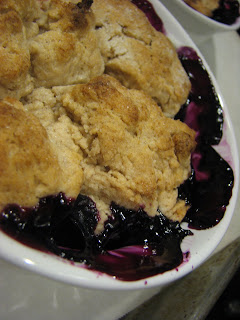