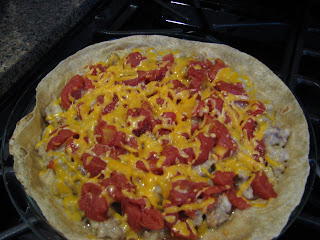 This recipe was an attempt to create something healthy that wouldn’t taste healthy. The reviews were mixed. Shane wasn’t crazy about it and thought it was rather bland. I added some sour cream to mine which definitely helped with the flavor some, but even I wasn’t a huge fan. It might be ok if I played around with adding some additional spices and things, but I’m not that motivated, so I probably won’t be making this again. 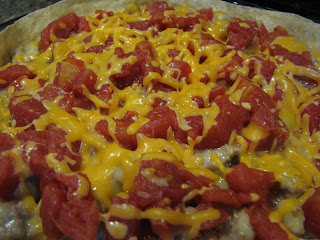 Preheat oven to 350°F. Coat a large skillet with cooking spray. Heat skillet over medium heat. Place turkey, onion and chili powder in skillet and cook until turkey is browned, stirring occasionally to crumble meat, about 8 minutes. Remove turkey mixture from skillet and set aside.

Place skillet over medium-high heat and add flour. Gradually add milk, stirring with a whisk until blended. Bring to a boil, reduce heat to medium and simmer until thickened, about 2 minutes.

Remove skillet from heat; stir in turkey mixture and cumin.

Wrap tortillas in damp paper towels and microwave on high until softened, about 15 seconds. Place 1 tortilla in bottom of a 9-inch pie plate. Spread 1/3 of turkey mixture over tortilla. Spoon 1 cup of tomato on top and sprinkle with 4 1/2 tablespoons of cheese. Repeat layers with remaining ingredients.