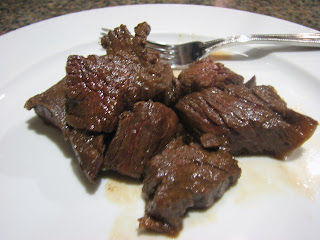 I decided to make steak tonight since we haven’t had it in a while. Generally when we make steak, we throw together whatever we have in our cabinet to make a marinade but today I tried something I found on allrecipes.com. I trimmed the fat off of the steak and cut it into cubes before sticking it in the marinade. The recipe recommended marinating for at least 2 hours but ours were sitting in the marinade for close to 5 hours. When it came time to cook the steak, we just threw the cubes into a skillet on medium-high heat for about 4-5 minutes.

I thought these were the best steak tips we’ve ever had! It probably helped that they were actually cooked medium rare like we wanted. We still haven’t mastered a good technique for ensuring our steaks are cooked to the right temp, so it’s always hit or miss. As you might guess by looking at the ingredients, this marinade does make the meat rather sweet, so if sweet isn’t your thing, you might want to skip this one. Shane doesn’t like his meat too sweet, so while he liked this recipe, he’d prefer something else next time.

According to the original recipe, this marinade would also work well on chicken and pork. 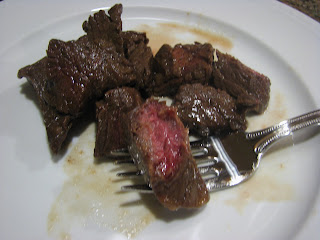 In a medium bowl, mix water, brown sugar, soy sauce, garlic, cinnamon, worcestershire sauce and onion powder. Transfer the marinade to a large ziploc bag and place meat in the mixture. Close the bag and marinate in the refrigerator at least 2 hours before cooking as desired.